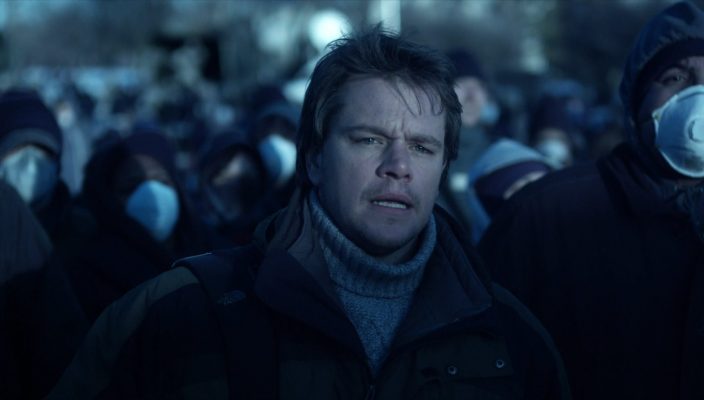 Given that all the movie theaters in the United States are closed for the time being, streaming services are seeming to become more essential to everyday life than they were before. Taking this into consideration, it is important to not only talk about what new shows are coming out for each respective platform but also discuss content that is already there.

One service that always seems to get overshadowed by its more successful brothers is Hulu. Given that this is the case, a quick look through Hulu’s catalog shows that there is a plethora of great shows and movies. One of these great movies is the excellent and timely film “Contagion,” starring Matt Damon.

“Contagion” tells the story of a fictional virus that quickly overtakes the world in a pandemic of biblical proportions. Title cards throughout the film show what day of the pandemic the film is depicting, and the audience is able to see how different people are dealing with it as it progresses.

These people include scientists that are sequencing the virus, Centers for Disease Control and World Health Organization officials who are dealing with the bureaucracy and politics associated with the disease, a fearmongering online journalist who makes money off the whole ordeal, and an ordinary man who loses his wife and stepson to the virus.

As the film unfolds, we see how each of these people’s professional and personal lives are affected by the virus and its effect on society. Over the course of a couple months, a vaccine is synthesized, and the world begins to heal from the massive losses the virus caused.

By showing how the virus was dealt with from several points of view, “Contagion” is able to give a comprehensive overview of how pandemics are ideally dealt with in a way that remains incredibly engaging for the audience, while at the same time building strong emotional ties with many characters in a relatively short amount of time. The audience is mainly supposed

to empathize with Damon’s character, the aforementioned “average Joes,” as he quickly becomes the audience’s surrogate. While viewers are shown a good amount of information regarding the disease that Damon does not receive, they spend the good majority of the beginning of the film as ignorant as him. When his wife seems to spontaneously die, the audience knows it’s because of the virus, but just how she contracted the disease is still unknown. By putting the audience in this position, the film allows the mystery of the virus to unfold in a very compelling and organic way.

The plot and storytelling of “Contagion” isn’t the only thing it has going for it. An all-star cast fills out the roster of characters with perfect precision. “Contagion” is full of Hollywood legends, including the aforementioned everyman of Damon, Gwenyth Paltrow, Lawrence Fishburne, Kate Winslet, Jude Law and Bryan Cranston. All of them play their parts beautifully and were excellently cast.

Just when you think the movie has shown you all the actors in the film, another big name is thrown into the fray. While this can sometimes be distracting, as it was in “Interstellar,” it works out very well here. If there was a singular standout performance, it would have to be Fishburne, who carries much of the movie’s most tense moments in a way very few actors would be able to do.

The plot of “Contagion” may hit a little too close to home at a time like this, but watching this movie while in quarantine turned out to be a cathartic experience. I had my reservations at first, but other than making me more aware about the dangers of touching my face and washing my hands, I left the film feeling no more paranoid than I felt going into it. What surprised me a great deal was the amount of similarities between the virus of the film and the coronavirus. Both

came from bats, were started in China, are respiratory in nature and had a large amount of online fake news spread about them.

While this movie came out when independent online news was in its infancy, it gets more right than wrong when it comes to the public’s reaction to what it sees on the internet. The one big thing that the film’s virus and the coronavirus do not have in common is that getting the film’s virus was an absolute death sentence, whereas if you are not in a high-risk population, there is a good chance that the coronavirus will not kill you. This fact alone was enough for me to separate what was happening on screen from what is happening in the real world enough to enjoy the film, while still absorbing the point it was trying to get across.

I would love to leave you with a line from the movie that really stuck with me. It is said by Fishburne as he is addressing the nation about the disease and he says, “What we do know is that in order to become sick you have to first come in contact with a sick person or something that they touched. In order to get scared, all you have to do is to come in contact with a rumor, or the television or the internet.” These are important words to remember as we continue to live our lives of social distancing and online classes.

In the end, as long as we are all home with more time on our hands than we know what to do with, we might as well find something to keep us occupied, and I cannot recommend a better movie to watch at this time than “Contagion.”