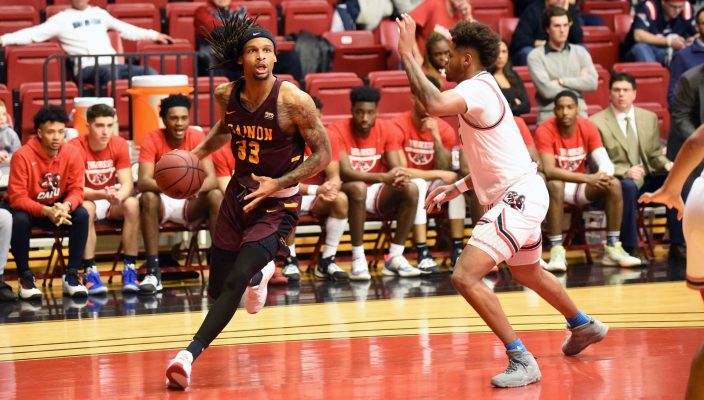 And so it ends — the tumultuous season is over, along with several careers for the Gannon University men’s basketball team.
The team was struck with injuries and devastating losses, but the Knights managed some career highs, upset victories and finished with a 14-13 overall record after being eliminated from the Pennsylvania State Athletic Conference Tournament in the opening round.
The Knights lost 74-58 to California University of Pennsylvania on March 2, just two days after beating the same Vulcans, 82-71, in the final game of the PSAC regular season.
Gannon trailed by 10 points at halftime in its only tournament outing but managed to climb within six points at 41-35 four minutes into the second half on a 3-pointer by Chris Clancy.
But that would be as close as the Knights would come on the night, as the Vulcans rebuilt a comfortable lead and maintained it throughout the final 16 minutes.
However, there were some key shining lights for the Knights in the loss.
DeAnte Cisero had an impressive outing and stat line, scoring a team-high 17 points on 6-of-13 shooting from the floor and 5-of-6 from the free-throw line.
Cisero finished as Gannon’s leading scorer on the season, averaging 14.1 points per game, and he also was the top rebounder at 5.6 boards per game. He was named to the second-team All-PSAC West squad.
Frank Webb Jr., another second-team All-PSAC West selection, was right on his tail in both categories, as he finished with a 13.1 point-per-game scoring average and a 5.5 per-game rebounding mark. He also finished with a team-leading 55 steals.
Cisero was held under 10 points in only six of the Knights’ 27 games on the season.
Another dynamic and consistent player for Gannon was Matt Johnson, the senior point guard out of Gary, Ind.
Johnson averaged 10.6 points per game and had some big games, scoring 26 points twice this season, against Pitt-Johnstown and Seton Hill.
The Knights are young, with only two players – and possibly three — graduating this year from first-year coach Kelvin Jefferson’s team.
Webb is listed as a redshirt junior, but there is some question as to whether he has any eligibility remaining.
An athletics department spokesman said the school is in the process of filing a waiver with the NCAA that would allow Webb to play another season, but there is a chance he would not be eligible for the 2020-21 season.
Two of Gannon’s young rising standouts are Clancy and Victor Olawoye. Clancy is a true freshman from Staten Island, N.Y., and he has been impressive this season, averaging 9.3 points per game and twice scoring 22 points in a game.
Olawoye, a sophomore shooting guard from Elmont, N.Y., averaged 8.2 points per game and totaled 43 steals this season.
Several media reports also have Kennedy Catholic High School standout Ike Herster committing to attend Gannon next year.
Herster is a 6-foot-6 shooting guard who led District 10 in scoring this season with an average of 27 points per game.