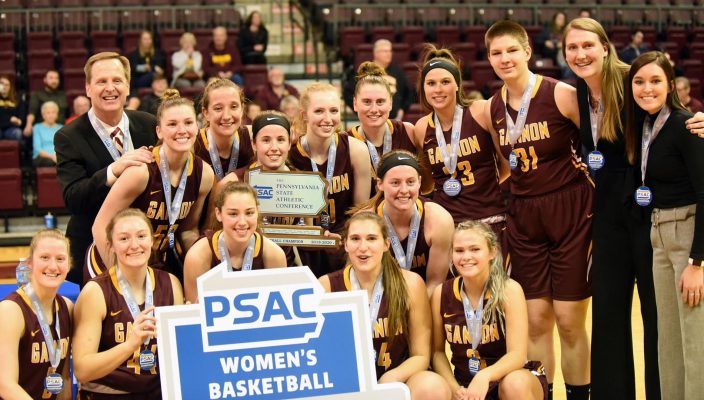 Unless you’re living under a rock, you know that the Gannon University women’s basketball team won the Pennsylvania State Athletic Conference Tournament championship last week and is set to compete this weekend in the NCAA Division II Atlantic Regional against No. 7 California.
The Knights will host a portion of the regional, meaning they will play at 7:30 p.m. Friday at the Hammermill Center against fellow PSAC member Cal U.
Gannon, 25-6 overall, is seeded No. 2 in the regional.
If the Knights win their opening-round game, they would advance to play the winner of Friday’s Glenville State-Notre Dame (Ohio) game at 7 p.m. Saturday at the Hammermill Center.
It took three spectacular wins in the PSAC Tournament for Gannon to get to this point.
On March 4, the Knights opened tournament play by defeating the Edinboro Fighting Scots, 67-53.
Gannon’s standout player of the game was Tori Obenrader with 19 points, 10 rebounds and two blocks.
That moved the Knights into a semifinal battle on March 7 against Shippensburg, and they came out on top by a 74-58 margin.
Chelsea Rourke led the way for Gannon with 20 points and four rebounds.
Finally, in the third and final match of the tournament, Gannon took on regular-season champion Indiana University of Pennsylvania, and the Knights posted a 50-40 victory at the Kovalchick Complex to improve to 25-6 overall.
The Knights’ top player is a familiar name, as Obenrader scored 17 points and pulled down a whopping 16 rebounds.
Gannon scored just 10 points in the opening 20 minutes, but exploded for 40 points in the final two quarters.
The Knights trailed 31-30 in the opening minutes of the fourth quarter before going on a 12-0 run that put them ahead for good at 42-31. Emily Poling keyed the run with a pair of 3-pointers.
IUP rallied with a 7-0 run of its own to get within four at 42-38 with 3 minutes, 24 seconds to play, but clutch free-throw shooting down the stretch enabled the Knights to hold on for the win.
Gannon did not miss a free throw in the final 64 seconds, hitting all eight of its attempts.
In addition to Obenrader’s 17 points and 16 rebounds, Gannon got 12 points from Sydney Mitchell. Gannon managed to connect on just 3 of 22 field-goal attempts in the first half but rallied to hit on 13 of 27 in the second half.