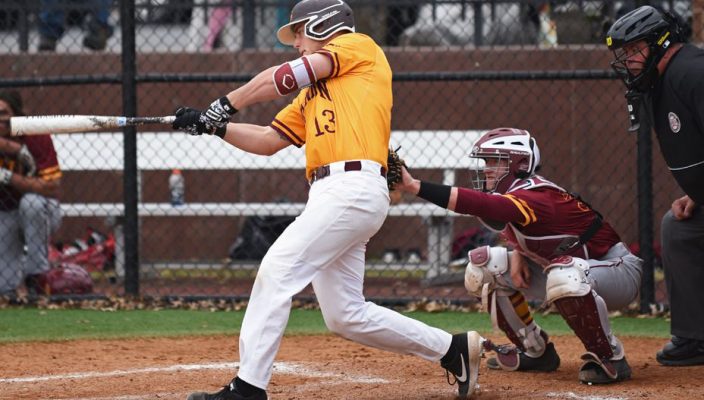 The Gannon University baseball team participated in the Russ-Matt Invitational in Florida last week as the season is now in full swing.
The Knights went 3-5 on the trip to Winter Haven and now stand at 3-9 overall going into a noon doubleheader Saturday at Jefferson in Philadelphia.
Gannon opened its Florida trip on March 1 with a 3-1 loss to Tiffin.
An early two-run lead for the Dragons meant the Knights had to come back but their comeback was stopped short in the ninth inning when a third run put the game out of reach.
The Knights regrouped for a bout with Minnesota Crookston, but fell to the Eagles, 15-1, as their only run came in the last inning.
After putting up a combined two runs in day one, the Knights came out with revenge on their minds against Wilmington on day two.
Eric Sapp got the start on the mound for the Knights and recorded seven strikeouts while allowing three hits in seven innings.
The Gannon bats came alive in the first and third innings as the Knights took a 5-0 lead before adding three more runs in the next inning.
Four more runs in the ninth inning cemented the 13-0 victory.
Andrew Motolla came on in relief for Sapp and recorded three strikeouts while allowing no hits.
John Bender came in to finish and allowed no hits on one strikeout to end the game.
Justin Hamm and Brandon Wetherholt each recorded a team-high three hits.
Hamm tallied one RBI while Wetherholt recorded two and first baseman Ian Hess drove in four.
Following that game, the Knights faced the University of the Sciences and lost a close one, 13-12.
Bender got the start on the mound and recorded his first loss of the season.
The offense showed up but a late three-run rally by USciences proved to be too much for the Knights to handle as they fell by just one run.
Hess drove in four more runs and had two hits while Trey Zeroski had three hits and Hamm and Elijah Quiceno each drove in two runs.
Two days later, Gannon faced Minnesota State in a game that went to extra innings.
The Knights got off to a hot start, scoring five runs, but a late comeback saw the game all tied up as the bottom of the ninth inning finished.
Hamm fired a walk-off single to right field in the bottom of the 10th inning to score Kieran Gagnon and win the game, 6-5, in extra innings.
Thomas Boyd earned the win for his work in the 10th inning, as he allowed no hits and dodged two walks to pitch a scoreless frame. Hess led the offense with three more RBIs.
The Knights kept the momentum rolling into their second game against Wilmington, coming away with a 4-2 win. Deven Judy posted his first win of the season, recording eight strikeouts and allowing one run in six innings. Brandon Weber came on in the seventh for the save.
Zeroski had three of Gannon’s seven hits and drove in a run.
The Knights faced Wilmington again for the third time in the invitational but fell to the Wildcats in that one, 5-2, in extra innings.
Gannon came back from a two-run hole to tie the game up before the seventh inning but in the top of the eighth, the Wildcats tacked on three runs, which put the game out of reach for the Knights.
The Knights finished the invitational on Saturday against St. Cloud State.
Gannon took a 3-0 lead in the third inning, clearing the bases. The Huskies came back to score three of their own to tie the game up.
Three quick runs in the eighth inning put the game out of reach for the Knights as they fell, 6-3, to round out their Florida trip.
Adam Malecki had three hits to lead Gannon’s 10-hit attack.