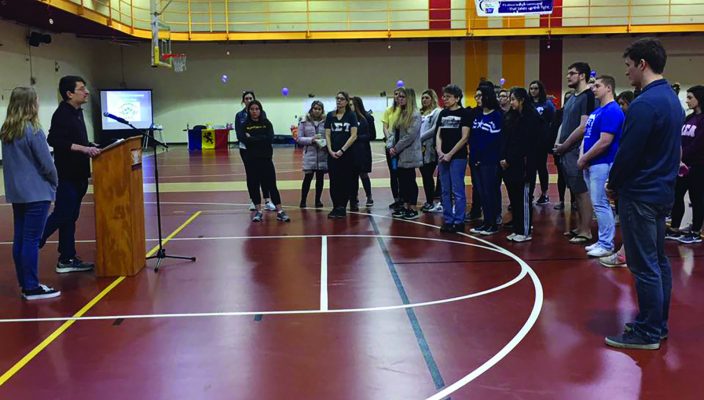 Relay For Life returns to Gannon; offers chance to remember

Gannon University’s annual Relay For Life event will be taking place starting at noon Saturday, March 21, at the Recreation & Wellness Center.
The event is an opportunity to acknowledge and celebrate the people most affected by the struggle of cancer, including survivors and caregivers.
It’s also a time to remember those who have lost their battles with cancer and rally to raise funds for research and patient services offered through the American Cancer Society. During the event, participants are members of teams that walk laps around the Recreation & Wellness Center. Teams will also participate in games and the chance to win prizes, with all proceeds going to the American Cancer Society.
Nathan Maietta, a junior biology and pre-med major who serves as co-president and fundraising chair for Gannon’s Relay For Life, said that the event brought in a little over $15,000 last year. He has set a goal to raise $20,000 this year.
Maietta highlighted the importance of their partnership with the university.
“The partnership with Gannon has been fantastic,” Maietta said. “Metz always donates. The Recreation Center is very helpful and allows us to hold our event there, and we even get guest speakers from Gannon’s staff.”
Maietta said that he believes this year’s Relay For Life will be a great opportunity for the Gannon community to come together and support each other.
“Cancer is sadly something that has affected many of us in different ways,” Maietta said. “To have members of our community come together and be a part of a tremendous cause is something really special, and I’m excited for a high turnout this year.”
Leaders of different student organizations expressed their excitement at participating in Relay For Life.
Devin Williams, a sophomore pre-med/biochemistry and mathematics major, and philanthropy chair for Delta Kappa Epsilon (DKE), said the fraternity was looking forward to its upcoming involvement in the event.
“Delta Kappa Epsilon is very excited to fundraise money and raise awareness for a prevalent issue that affects so many people and the ones close to them every day,” Williams said. “Delta Kappa Epsilon prides itself on giving back to the community in any form we can; Relay For Life is a great opportunity to really bring out our values as an organization,” Williams said.
Chloe Kernan, a sophomore public service & global affairs major and director of philanthropy for Alpha Sigma Tau (AST), said the sorority was excited for the opportunity to be involved in the day’s activities.
“It’s a really special event that our sorority can go to and we look forward to raising money,” Kernan said. “So far we’ve raised $3,000; I know since starting the team and asking girls to fund- raise, many of my sisters have contacted me and told me of their stories and how their families have been impacted.”
Kernan said that their involvement in Relay For Life is important in part due to AST’s relationship with the American Cancer Society, which serves as one of its local philanthropies.
Kenny Filer, a sophomore criminal justice major, said he planned on attending, despite not tabeling with any club or organization at the event.
“I think Relay For Life is a great way to get the community together to volunteer and support others who have cancer, or know someone who has been affected by cancer,” Filer said. “No matter the situation, everyone knows how serious cancer is and it’s great to see people here at Gannon supporting each other.”
The event will begin at noon and end at 8 p.m.