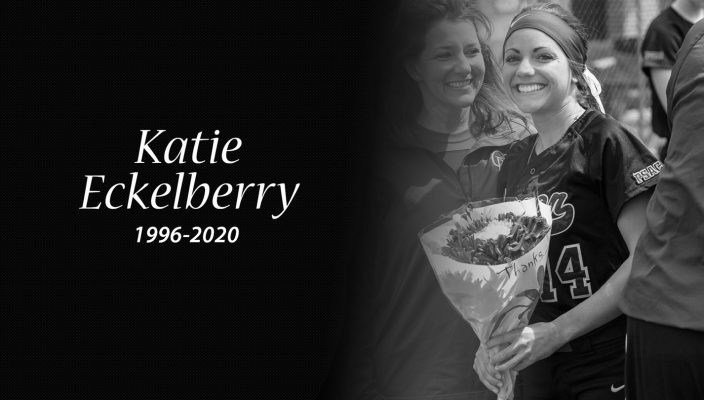 The Gannon University community lost a member Friday night when Kaitlyn Eckelberry died from injuries sustained in an auto accident just north of Pittsburgh.
Eckelberry, a member of the softball team for four years, earned her bachelor’s degree in 2018 and added a master’s in physician assistant science in 2019.
The two-vehicle head-on collision on Route 8 in Hampton Township happened when a 2010 Jeep Grand Cherokee traveling northbound crossed over the line and struck Eckelberry’s 2020 Hyundai Elantra. The crash is currently under investigation.
Meanwhile, students and faculty are speaking out about how Eckelberry impacted their lives.
Michelle Wiley, the Gannon softball coach, said Eckelberry was “one of the most amazing young ladies” she has had the ability to coach.
“She was one of the hardest workers both on and off the field,” Wiley said. “She saw the potential in others and challenged them to excel. The energy that she carried and passed along was like no other.
“In a short time, Kaity impacted a significant amount of people in all aspects of life. Her love for her family, friends, softball, school and life is indescribable.”
Eckelberry, 23, was from Uniontown, Ohio. In addition to being an honors student, she was named a National Fastpitch Coaches Association All-American Scholar-Athlete three times and received the NCAA Division II Athletics Directors Association Academic Achievement Award three times.
She served her community selflessly, evident through her involvement with Make-A-Wish and the Winner of Wheels event.
Former teammate Raygan Walters said Eckelberry was “a little bit of everything.”
“She was hilarious and had so much energy packed into her little body,” Walters said. “She was always smiling and trying to make others smile and laugh. She always went the extra mile without being asked.”
Walters recalled a time Eckelberry brought in green mustaches for St. Patrick’s Day and used them to imitate their coach, and had everyone rolling with laughter.
“She was just so full of life,” Walters said. “She has the best smile and brown eyes. She was a light to everyone.”
If you are having difficulty working through this loss, you are encouraged to contact the Student Health and Counseling Center at 814-871-7622. Visitation will be held from 4 p.m. to 8 p.m. Thursday at the Anthony Funeral Home Kucko-Anthony-Kertesz Chapel in Akron, Ohio.