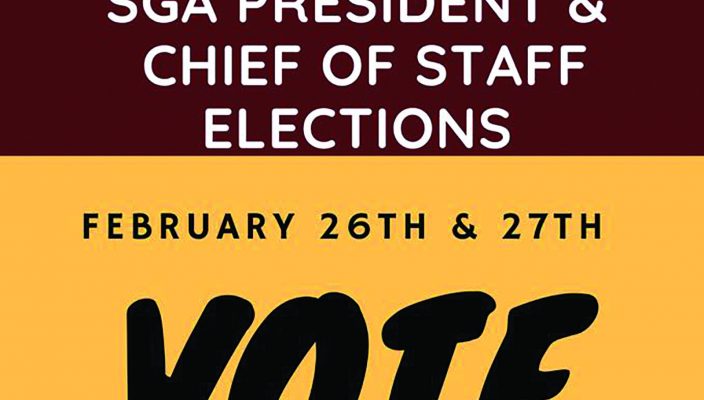 Gannon University’s annual Student Government Association (SGA) election for president and chief of staff will be taking place Wednesday and Thursday.
The candidates for president this year will be Beth Kropf, a junior psychology major, and Matt Schessman, a sophomore pre-dental and chemistry major.
Running for chief of staff with Kropf is Ryan Young, a junior biology major, and running with
Schlessman is Nathan Maietta, a junior biology and pre-med major.
The candidates for president said that their passion and excitement for the student body were motivating factors in their decisions to run.
“I am running for Student Government Association President because I have such a passion for the organization,” Kropf said. “I believe my Gannon Experience would not be remotely the samewithout the impacts of SGA, and I feel it is now my privilege to give back to Gannon University and the student body in this role.”
“I am running for President of SGA because I want to see SGA evolve into a better version of itself by changing the structure of it,” Schlessman said.
“When I talked to clubs/organizations, commuters, international students and the general student body, it seems that students are unaware of what is happening around campus and what SGA does. That is very concerning to me since SGA is constantly making decisions on behalf of the student body.”
As for the candidates running for chief of staff, they said they were excited to run for such an important position.
“I am running for chief of staff for SGA because I am passionate about the organization,”Young said.
“I am fully invested in SGA’s values and purpose, and I wish to continue to live these out through the role to best serve the Student Body.”
“I am running for chief of staff because I share the same vision as Matt that SGA needs to evolve into a greater being,” Maietta said.
“After talking to many people around campus they feel that SGA is nontransparent of the events they hold and what is going on with the organization within. I want to see that change to better the student body and have students become active and aware of what SGA is doing.”
Both presidential candidates addressed what their priorities would be if elected. “If elected, I want to decrease the barrier that some perceive exists between SGA and the student body at large,” Kropf said.
She also said she wants to connect more with individual students, as well as larger populations of students to get a feel for the ups and downs of their Gannon experience. This, she said, will be done through her being present on campus.
“Students may stop me at any time with feedback they have. In addition, I would like to check in with club and organization presidents in person during the semester to get a better idea of the Gannon experience for those students,” Kropf said.
Schlessman and Maietta are running on a campaign slogan: “Choose your F.A.T.E.” This stands for Fairness, Accountability, Transparency, and Efficiency.
“We saw these were the common areas of where SGA is slacking when we talked to student body,” Schlessman said. “Once we get elected, the student body will automatically see that change.”
The candidates for chief of staff also envision interactive roles for their positions, hoping to emphasize communication with other groups at Gannon.
Young aims to provide more clarity about the organization’s projects and processes, as well as provide more context, transparency and assistance to student organizations
“I am also committed to promoting collaboration through the position,” he said. “With effective collaboration between SGA and other organizations, we will be able to further promote community among our Gannon Family.”
For Maietta, it’s his experience with the organization through other clubs and activities he’s participated in at Gannon that have shown him how important communication is. If elected, he wants to bring that to the table.
“I have been through SGA processes for the organizations I belong to, and I am very well-connected around campus,” Maietta said.” “I believe that I can keep SGA transparent to the student body.”
Regardless of the different visions, both tickets encourage all students to make their voice heard vote.
“By voting, students are expressing who they believe will best represent them to the university and to SGA,” Kropf said. “None of what we do is possible without students sharing their voices.”
“Students should vote for this election because, ultimately, they will be choosing their leadership team and who will actually represent them,” Schlessman said.
Voting will begin at midnight Wednesday and conclude at 11:59 p.m. Thursday.

« Water polo goes 3-1 in Washington & Jefferson Tournament Experience everything like a child, find joy in the simpler times »