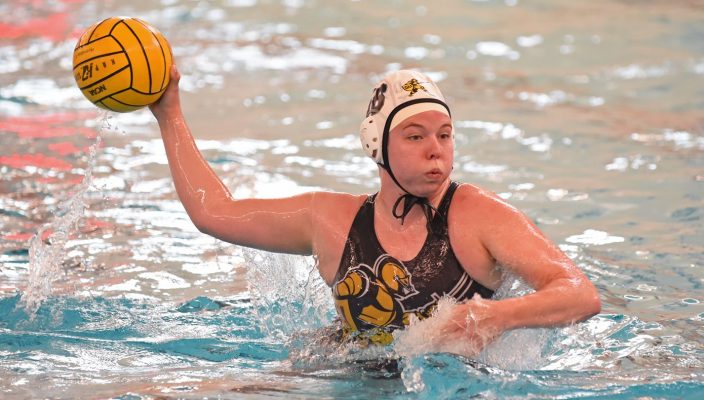 The Gannon University women’s water polo team enjoyed a successful weekend in Washington, Pa., winning three of the four matches played at the Washington and Jefferson Invitational.
The Knights’ 3-1 tournament showing left them with an overall record of 5-7 going into this weekend’s Grove City Invitational, where Gannon will square off against three teams.
The Knights opened the W&J Invitational against Wittenberg and dominated from start to finish.
Gannon opened the first half with 12 points, enough to win the match right there. A 14-point second half secured the 26-11 victory.
Kelly Fehr took over the game with 10 goals, leading the offensive effort, while the defense did its job and gave Gannon the comfortable lead and win.
Game Two saw the Knights get tested by McKendree in a highly competitive bout, but they came away with a narrow 16-15 victory.
Gannon kept the scoring going in that game with six goals in the first quarter.
Fehr netted the first goal of the second before Danielle Borelli scored for McKendree. Campbell Ruh tallied her second and third goals of the game at the 6:37 and 4:43 mark.
Julia Kreidinger scored with 2:08 left for the Knights’ final goal of the half. McKendree would net one more to tie the game 10-10 at the break.
The game remained tight throughout the second half. Kreidinger tied the game with three minutes left to play, while Ruh netted the game-winner at the 2:23 mark to seal the 16-15 victory and Day One sweep for the Knights.
On Sunday, the Knights went back to work as they faced Salem in another intense match that wound up in overtime.
Gannon opened the day with three straight goals to take a 3-0 lead early in the first quarter, and the team held on to a 5-3 lead going into the second quarter.
Nicole Wiemken got the final say in the half with a goal for Gannon with just nine seconds left as the Knights took a 7-5 lead into the break.
Salem cut the lead to one in the third quarter after outscoring the Knights 4-3. Kreidinger and Wiemken would score for Gannon before the end of the quarter, but the Gannon lead was cut to one heading into the final frame.
With 2:39 left to play, Salem tied the game to force overtime.
The Knights netted the only goals in overtime, as Mary Trese Squeglia got her second goal of the game with 28 second left in the first period of overtime.
Fehr added another in the second period to secure the 14-12 win.  The Knights finished their weekend against Virginia Military Institute and fell 17-8. Gannon was held to one goal in the first quarter and never seemed to recover from that, despite a second-quarter rally that resulted in four goals. The Knights scored three goals in the entire second half as they were outscored by four in each of the last two quarters. Gannon opens play in the Grove City Invitational at 5:30 p.m. Friday against the host team. Following that game, the Knights will have a chance at redemption against VMI at 10:30 a.m. Saturday, and they return at 3:30 p.m. for their final tournament outing against Wittenberg.