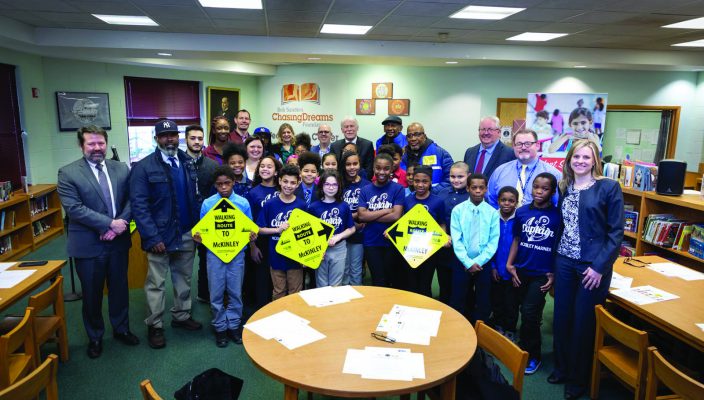 A group of Gannon University students received local recognition and praise last month for their work creating safer routes for local elementary students to get to and from school.
The group of students, including Cora Yenges, Adam Figurski and Qusai Abdel Wahab, began working last semester to map the routes students at various elementary schools took to get to and from school. They undertook the project in their Geographic Information System (GIS) class.
The project became more than that as they partnered with The United Way of Erie County, which is just one of the organizations that came to class looking for help from students, Christopher Magno, Ph.D., an associate professor in the criminal justice program, said.
Over the course of the fall semester, the students worked to collect data from The United Way of Erie County and the Erie Police Department, Abdel Wahab, a sophomore criminal justice major, said.
Once they imported the data, the students were sent out to take photos of the routes students took at various local elementary schools, looking specifically for unsafe walking conditions.
Overall, the students were looking for anything deemed unsafe, Magno said. This included faded street signs, blocked sidewalks and anything else that could become a hazard. When any of these things were spotted, the students would record it and map it.
Each student in the group was in charge of surveying their own elementary school. Abdel Wahab was assigned Pfeiffer-Burleigh Elementary School, where he found a prison release program along the routes the students took.
Yenges, a sophomore criminal justice major, was tasked with Edison Elementary school.
“I found that the roads and sidewalks that children took to get to school weren’t in bad condition, especially for the area that the school was located in,” Yenges said.
In contrast, Figurski, a senior criminal justice major, found more issues along the routes taken to and from East Middle School.
“I found that the walkways were very unsafe and a lot of hazards throughout the area that were unsafe for the kids,” he said. “Most of the schools we documented were like this and needed some changes so things could be safer for the students.”
As the Gannon students completed the project, The United Way of Erie County and the city planning board saw the changes that needed to be made for the safety of these students, Magno said,
“The city’s just so thankful we identify the routes, because they don’t know where the problem is,” he said. “The students highlight the problem so it becomes known; it’s a great thing about the class.”
The collection of this data led to the creation and launch of Safe Routes to School on Jan. 28. The program, launched by The United Way of Erie County, the Erie School District and several other organizations, is designed to help find the safest routes to the schools of the area.
The program began with McKinley Elementary School, guiding the 500-plus students to and from school with posted signs. These bright green signs show directing arrows on nearly 100 preexisting signposts in the neighborhood. Blue Coat volunteers also help guide the students along their paths.
The long-term goal of Safe Routes to School is to boost the performance of these students by ensuring they get to school. Before this, students faced danger regularly in getting to school.
Before this program, the young students often walked in the streets and walked alone. Now, they have a clear route and guide to aid them in their daily trek.
It was also highly rewarding for the Gannon students who made the project possible to see the results of their work, Yenges said.
“My favorite part about the whole thing was being able to help the community,” she said.
Figurski said he felt much the same way.
“I think that it was a great thing we did that was rewarding seeing the maps we created and safe routes we provided, and I hope it helped the kids and their families get to school safer,” he said.
Exemplifying part of the Gannon mission, the students were able to directly benefit the Erie community, especially as the project continues.
Like his partners, Abdel Wahab said he was happy to help the community in any way he could.
“I feel great to help students go to school,” he said. “I feel great to be engaged with the community.”