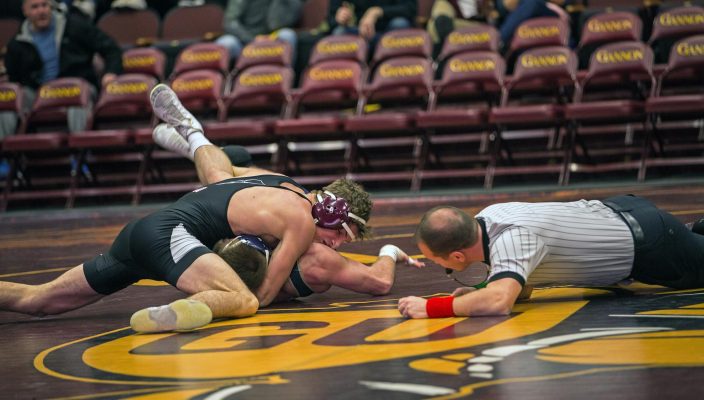 The Gannon University men’s wrestling team got off to a fast start and never looked back Tuesday night, defeating rival Mercyhurst, 32-11, in a one-sided dual meet at the Mercyhurst Athletic Center.
The victory extended Gannon’s dual meet winning streak to five matches and left the Knights 8-5 overall and 5-1 in Pennsylvania State Athletic Conference dual meet action.
The Knights were looking to rebound from a loss against the Lakers earlier this season at the NWCA National Duals; Mercyhurst prevailed in that meet, 28-13.
Rebound was an understatement as Tuesday night’s outcome was never in doubt with Gannon winning seven of the 10 bouts on the evening.
Jacob Dunlap got the Knights off to a quick start by posting a 14-4 major decision over Jacob Ruggeri at 125 pounds. Both wrestlers are ranked in the region.
At 133, Gannon’s Austin Hertel outlasted Mercyhurt’s Eric Bartos – ranked eighth in the nation in Division II – as he scored the match’s only takedown with six seconds remaining to post a 3-1 victory.
After Nick Young dropped a 5-3 decision to Alexis Soriano at 141 pounds, the Knights then brought out the pin machine as Dom Means (149 pounds), Evan Fisler (157) and Connor Day (174) all won by fall.
Gannon added two more victories, as eighth-ranked Alex Farenchak posted an 18-4 major decision over Jason Breeden at 165 pounds and Joel Liese edged Trever Begin, 3-2, at 184 pounds to account for Gannon’s final decision of the night.
Last week, the team continued its winning form by defeating Lake Erie College Saturday, 31-9.
Following their statement-win at East Stroudsburg University against the Warriors on Feb. 2, the Knights traveled to Painesville, Ohio, to meet the Storm for a dual.
Lake Erie managed to take only two matches as the Knights won the remaining eight to post a convincing victory.
Fisler’s win was his eighth in a row, and also the sophomore’s 10th dual win of the season. His run includes three majors and five decisions, with four of those decisions coming by at least four points.
Leise won by technical fall over Honour Kline at 184 pounds. Two Knights wrestlers posted wins by major decision – Means whipped Brandon Tenney, 11-1, at 149 pounds and Luigi Yates blanked John Penfold, 13-0, at 174 pounds.
Winning by decision for Gannon were Hertel at 133, Nick Young at 141 and Farenchak at 165.
Next up, the Knights will travel to Johnstown to face Pitt-Johnstown in their final PSAC dual meet of the season on Saturday.
The Knights’ B team will go up against John Carroll University in University Heights, Ohio, on Sunday to finish their regular season.
The NCAA Division II Super Regional tournament will take place Feb. 29 in Erie.