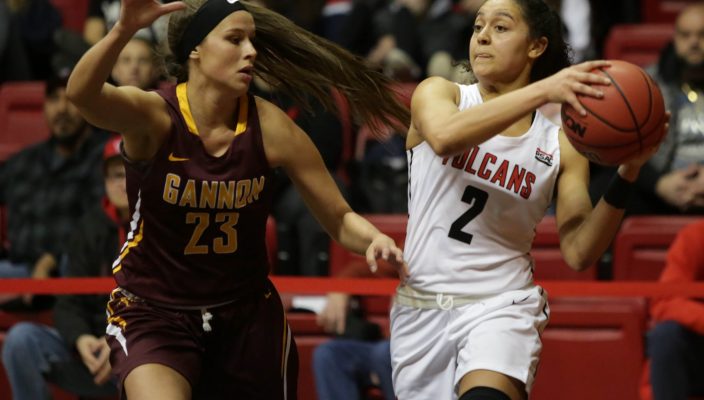 Gannon University’s women’s basketball team had its six-game win streak snapped last week with a loss to Edinboro, but the Knights rebounded to get back on the winning track with a victory over Seton Hill Saturday.
Gannon entered its Feb. 5 matchup at Edinboro on a hot streak, having won 12 of its last 13 games.
But the Knights fell short, 56-52.
The loss, combined with Saturday’s 69-54 victory over Seton Hill, put Gannon 18-5 overall and 14-3 in Pennsylvania State Athletic Conference play heading into Wednesday’s 5:30 p.m. meeting with rival Mercyhurst at the Hammermill Center.
Gannon currently sits in second place in the PSAC West, trailing only unbeaten Indiana University of Pennsylvania, which is 16-0 in conference play and 21-1 overall.
In the Feb. 5 matchup with Edinboro, the host Fighting Scots used a stingy defensive start to take an early 8-3 lead at the end of the first quarter.
The Knights shot 56% from the field in the second quarter, outscoring Edinboro 19-17 in a quarter that saw both offenses begin to find a rhythm.
Haley Tewes scored the first eight points of the quarter for Gannon.
Michaela Barnes made back-to-back threes toward the end of the first half for Edinboro to help the Scots take a 25-22 lead into intermission.
Tori Obenrader scored five straight points for the Knights coming out of the break, as well as the final basket of the quarter to tie the game at 36-36 going into the fourth quarter.
Three-pointers from Sydney Mitchell and Chelsea Rourke gave Gannon its first lead since the first quarter. Another three from Emily Poling gave Gannon a 47-43 lead.
After Edinboro rallied to pull ahead 49-47, Poling then hit another three to regain the lead for the Knights, 50-49.
But that would be the last time the Knights led, as Barnes scored on a layup and converted a free throw to make it 52-50 with 13 seconds remaining.
A Gannon turnover with eight seconds to play resulted in a foul, and Edinboro’s Rana Elhusseini converted four free throws down the stretch to seal the win.
Rourke led Gannon with 12 points, as this contest marked the first time since Jan. 11 that at least three Gannon players did not score double-figures.
Obenrader also saw her double-figure scoring streak end at 12 games, as she tallied seven points and six rebounds.
Gannon got back on track with an impressive 15-point win over Seton Hill Saturday.
Mitchell led the Knights with 19 points and Obenrader chipped in with 18 points and 11 rebounds for her sixth double-double of the year.
The Griffins led 17-16 after the first quarter, but a 7-0 run to start the second quarter, sparked by Obenrader, gave Gannon a six-point lead.
The Knights used another 7-0 run to extend their first-half lead, capped off by a 3-pointer from Poling.
Gannon used a solid defensive effort in the second quarter, holding Seton Hill to just five points, to build a 35-22 lead at the half.
The Griffins used runs of 7-0 and 10-3 to pull themselves to within three of Gannon at the end of the third quarter, but Obenrader and Mitchell combined for 14 of Gannon’s 24 fourth-quarter points to help solidify the win.
Obenrader finished with 18 points and 11 rebounds to become the first player since Lanise Sanders (2016-2017) to record at least six double-doubles in a season.
Mitchell was also one point shy of her career high, shooting 6 of 10 from the field en route to a game-high 19 points.
Following Wednesday’s matchup with Mercyhurst, Gannon will travel to meet IUP at 5:30 p.m. Saturday.

« XFL is back How to be safe on Valentine’s day »