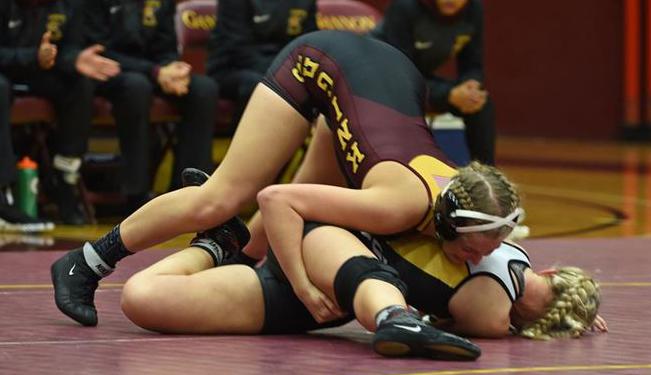 The Gannon University women’s wrestling team made a strong showing at last weekend’s WCWA Nationals, held in Marietta, Ga., as four competitors captured All-America honors.
It marked the first time in the program’s two-year history that any Gannon wrestler achieved such a status.
Coming home as All-Americans were Annabelle Helm, Amara Devericks, Kendall McGarity and Chrystal Raine.
Wrestlers who placed among the top eight in their respective weight classes were awarded All-America honors.
Helm, from Vancouver, Wash., topped all Gannon wrestlers by finishing third at 155 pounds. She posted a 6-1 record on the weekend, including a 3-0 mark on Saturday’s final day of competition.
Her highlight came in a come-from-behind 7-6 decision over No. 4 Alexia Foca in Saturday’s consolation final.
Devericks, from Capistrano Beach, Calif., wound up sixth at 170 pounds after winning two of her three matches. She sustained an injury that forced her to default to a sixth-place finish.
McGarity, from Spring Branch, Texas, finished in seventh place at 191 pounds with a 1-1 mark, coming back from a loss by pin to record her own pin in the battle for seventh place.
Fellow Texan Raine, from Dallas, placed eighth at 101 pounds with a 1-3 record.
Other individuals competing for Gannon were Araceli Cruz at 109 pounds, Jordan Jarvi (116), Mikayla Vega (116), Alexandra Alers (123), Mikayla Dockweiler (130), Jezebel Garcia (143), Stephanie Floor (143) and Daniela Morales Dardon (170).
As a team, Gannon wound up tied for 11th among 20 teams competing.
The Knights will return to action by traveling to battle Tiffin at 6 p.m. Friday. Gannon’s final home appearance will come Saturday, Feb. 29, against East Stroudsburg at the Hammermill Center.
That will be the team’s final tuneup prior to the Women’s National Collegiate Championship, set for March 6-7 at Adrian, Mich.