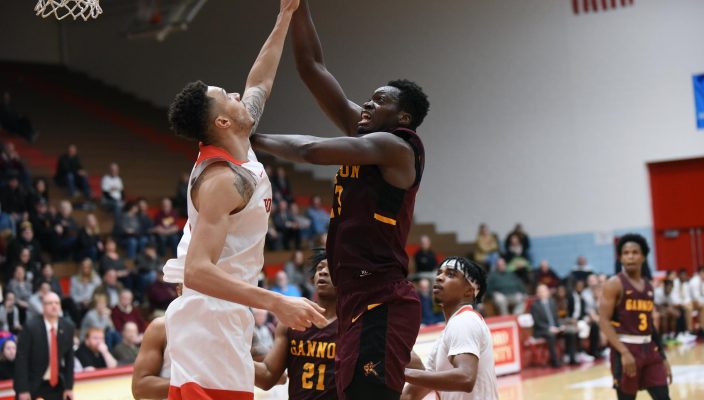 The Gannon University men’s basketball team was able to stretch its win streak to five after two big wins against Edinboro and Seton Hill last week.
The Knights first traveled to Edinboro on Feb. 5 and secured a dominant 74-47 win. Gannon followed that up with an 82-76 win Saturday at Seton Hall.
The two wins improved the Knights’ overall record to 12-9 and left them 11-6 in Pennsylvania State Athletic Conference play going into Wednesday’s 7:30 p.m. matchup with crosstown rival Mercyhurst at the Hammermill Center.
The Lakers enter play with a 12-5 mark in PSAC play, good for third place in the West behind Indiana University of Pennsylvania (14-2) and Pitt-Johnstown (13-4). California University of Pennsylvania currently is in fourth place at 11-5, a half-game ahead of Gannon.
In the Feb. 5 matchup at Edinboro, the two teams traded buckets until Gannon snatched an 11-9 edge after Michael Tertsea drained a layup. The Knights connected on three straight possessions to stretch their lead to eight, 23-15. Edinboro responded to chip the Gannon edge down to one, 28-27.
Gannon’s Frank Webb Jr. helped slow the Fighting Scots’ rally by knifing inside for a layup to make it 30-27 with 3 minutes, 14 seconds to play in the half.
Gannon expanded its lead to eight at 38-30 at intermission.
The Knights built their lead to 12 at 46-34 at the start of the second half, with Victor Olawoye contributing a pair of free throws.
Edinboro answered with six straight points, but Gannon regained control and stretched its lead to 10 at 52-42 on a layup from Webb.
Gannon began to put the game away when Matt Johnson found Webb for a dunk in transition, making the score 58-44 with 7:21 to play. The Knights continued to roll on offense after Chris Clancy connected on two straight threes to increase the edge to 66-44 with 3:59 remaining. Gannon went on to close out the remaining time to earn the win, 74-47.
The Knights dominated the paint, scoring 36 and registering a total of 50 rebounds compared with Edinboro’s 33.
The Scots struggled with their shooting, finishing with a 24% mark while Gannon shot 43% from the field.
In Saturday’s win at Seton Hill, Johnson got the Knights going early, connecting on thee of his first four shots and a couple of free throws to put Gannon out in front, 8-0. Seton Hill stormed back to cut the deficit down to one, 10-9, and the Griffins continued to push, stealing their first lead of the day, 15-14.
Webb answered for the Knights, netting a layup at the 7:52 mark to tie the game at 18-18.
Gannon closed the half building a seven-point edge, 33-26, after Webb buried a pair of free throws. The Griffins were able to connect on a 3-pointer as time expired in the first half to make the score 33-29 at the break.
Gannon opened the second half connecting on its first two possessions to extend the lead to eight, 37-29, following a layup from Tertsea. The Griffins retaliated with a 5-0 run to pull back within three, 37-34. Gannon then found an offensive rhythm, stretching its lead into double figures, 46-36.
The Griffins cut the deficit to two, 51-49, but the Knights responded by going on an 11-4 run to extend the lead to 62-53.
Seton Hill’s Jimmy Moon then put the Griffins on his back, hitting three straight 3-pointers to cut the edge to five, 72-67. However, Johnson connected on 6-of-6 free-throw attempts in the final minute to help the Knights hang on for their fifth straight win.
Following Wednesday’s matchup with Mercyhurst, Gannon will be in action at 7:30 p.m. Saturday at IUP, the nation’s ninth-ranked Division II school.