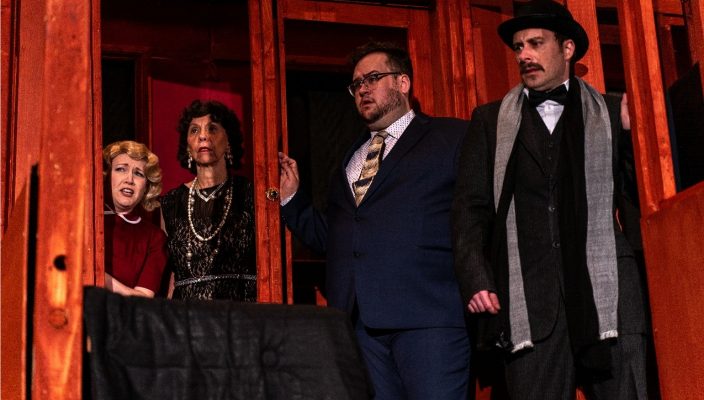 Based on the acclaimed Agatha Christie novel, the stage adaptation of “Murder on the Orient Express” features a luxurious train, fine dining, opulent costuming and, of course, a murder most foul.
All An Act Theatre’s staging is skillfully directed by David W. Mitchell.
The train, surprisingly full so late in the season, is carrying a quirky host of passengers from Istanbul to Western Europe.
Just after midnight, a snowdrift stops the Orient Express in its tracks. By the time the sun rises, there is one fewer passenger among the ranks.
An American business mogul, played by Samuel Ratchett, is found dead in his compartment with eight stab wounds to the chest.
Luckily, famed Belgian detective Hercule Poirot, played with precision and care by J.D. Mizikowski, happens to be onboard.
Isolated in the mountains of Western Europe, Poirot is tasked with identifying the murderer before he or she decides to strike again.
The cast does a spectacular job portraying the array of eccentric 1930s travelers.
Char Newport is a particular standout as a chatty American who incites the wrath of her fellow passengers by singing showtunes at all hours and spontaneously spouting details about her past husbands.
Jade Mitchell shines as a young Hungarian countess, who captures plenty of male attention with beauty, but may have more running through her mind than her sparkly updo suggests.
An older couple in the midst of elopement, portrayed by Meranda Piazza and Chad Santos, appear to be running from something.
A stern Russian princess (Ruth Scandale) and her simpering lady-in-waiting (Marie Glaser) make a comedic duo.
Michael Hipwell plays the flustered personal assistant of the murdered man.
Giovanni Ciminella portrays the dignified conductor of the train, and Chris Hinchman makes a brief appearance as the head waiter.
Finally, Gannon biology professor Steve Ropski, Ph.D., rounds out the talented cast.
Ropski provides plenty of laughs as Monsieur Bouc, the manager of the Orient Express, who spends much of the play clumsily trying to assist in the investigation and wringing his hands.
On one emergency phone call, he can be heard lamenting about the dwindling provisions, restless passengers and dead body decomposing in compartment two, before sarcastically inquiring how the person on the other end of the line is doing.
The role is a complete departure from the caustic patriarch Ropski played in last year’s heart-wrenching Dramashop production “The Humans.”
“’Orient Express’ is more lighthearted, and has a good amount of humor for a murder mystery,” Ropski said. “There are plenty of subtle double entendres if you listen closely.”
While Ropski took several French courses in high school, maintaining an accent throughout the show requires a lot of focus.
“There’s a total of six accents: French, Scottish, Hungarian, American, Belgian and Russian, so you have to be careful that you don’t pick up anyone else’s!” Ropski said with a laugh.
In addition to the talented cast, the production staff and stage crew also do a phenomenal job in brining the opulence of the Orient Express to life.
The play unfolds in short, suspenseful vignettes, masterfully controlled by Tom Kiser on lighting and sound execution.
Similar to last fall’s production of “Sherlock Holmes,” the show also features a rotating stage to maximize use of the All An Act space.
When the lights dim and the stage is rotated to reveal a different part of the set, the chugging sound is reminiscent of wheels turning on a great train, which makes for a perfect immersive experience.
“Murder on the Orient Express” runs at 7:30 p.m. on Fridays and Saturdays and 3 p.m. on Sundays through March 1.
All An Act Theatre is located at 652 W. 17th St. (at the corner of 17th and Poplar).
Tickets are $12 for students and $15 for adults and can be purchased at the door or online at allanact.net.