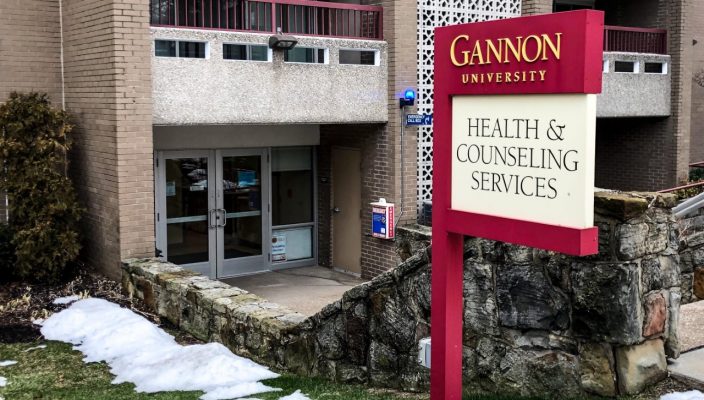 As more and more cases of the novel coronavirus appear closer and closer to Gannon University, students worry about what is being done to keep them healthy. With growing concern, Gannon focuses on awareness as preparation after releasing its first update.
In this campus-wide update, students, faculty and staff were informed that Gannon is closely monitoring the spread of the disease, but there is no current threat to campus.
Despite this, precautions have been implemented at the Health and Counseling Center, said Brenda Boetger, a certified registered nurse at the Health and Counseling Center.
“We have face masks in the office to place on any patient with coughing or sneezing, regardless of the cause, to help prevent the spread of respiratory illness of all kinds,” she said. “Patients who are coughing or sneezing will be moved to a patient room as soon as possible to prevent exposure to others in the waiting room.”
Boetger also urges students, faculty and staff to frequently wash their hands, immediately throw away tissues and to cover their coughs. This is the best way to prevent illness.
“As changes develop that may affect Gannon, the Health and Counseling clinic will ensure that the Gannon family continues to be updated as necessary,” Boetger said.
The Health and Counseling Center isn’t the only place on campus monitoring the illness’s spread. The Learning Abroad and International Academic Programs office is also watching the coronavirus, Megan McHugh, director of the programs, said.
With programs, courses and students across the world, they have begun monitoring the virus in relation to where Gannon programs are offered, McHugh said.
“At this time, we do not have any spring 2020 GIFT Courses, ABSTs, or TRAVEL trips scheduled to travel to China, and thus have not yet made any changes to any of our spring 2020 offerings,” she said.
This may change if the virus continues to spread, as the safety of students, faculty and staff are a priority, McHugh said.
“All of our international travel programs rely heavily on the recommendations of the U.S. State Department, and so we will watch for changes in State Department recommendations in terms of travel locations.”
Students like Nicole Borro, a senior English major, aren’t concerned about reports of the virus. She said she thinks Gannon is handling the virus well, focusing on monitoring so long as there is no threat to campus.
“I think that’s a good approach, because I’ve read somewhere that the flu has killed more people than the coronavirus ever has,” Borro said. “I think worrying too much is a bit paranoid.”
Still, she said she wishes this approach came in a form other than email.
“I wish there was a better way to get the information out than an email since students don’t really read emails from Gannon, but I can’t think of a better way,” she said.
There has been no concern to campus safety because of the virus, and that has helped alleviate some students’ concerns. Emily Hall, a junior criminal justice and chemistry major who will be going to Japan for a TRAVEL trip after the semester ends, hasn’t felt any reason to worry either.
“I’m not really concerned about it, personally,” Hall said. “If the situation were to significantly worsen, maybe I would be worried, but as it hasn’t resulted in a large number of deaths in Japan as of this point, it’s not a prominent concern.”
She said other people going on the trip with her feel the same way. No one is concerned.
It does help, though, that there haven’t been many deaths reported in Japan, despite its proximity to China.
Despite her ease about the situation, she said she wished she was more aware of what Gannon was doing regarding the virus. The email sent out to the student body was missed by many.
As a university with such a large international presence, this was something on her mind, she said.
“It might be nice if they were to send an informative message to the student body if it becomes more of a threat in the U.S. or countries where a significant number of international students live,” she said.
ALEXA ROGERS
rogers034@gannon.edu