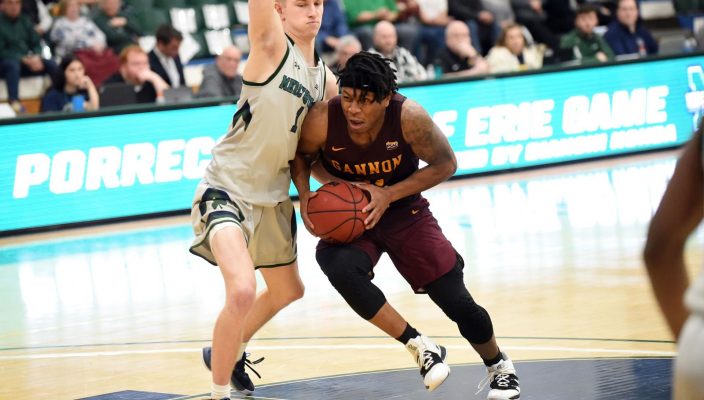 The Gannon University men’s basketball team stretched its win streak to three games after two Pennsylvania State Athletic Conference victories last week.
Matt Johnson led the Knights on Wednesday with 20 points, three rebounds and four assists to help Gannon to a comfortable 69-49 road victory over Slippery Rock University.
Three days later, the Knights hosted Pitt-Johnstown in a highly competitive game at the Hammermill Center, and they came away with a 64-58 victory.
The wins boosted Gannon’s overall record to 10-9 and left the Knights 9-6 in PSAC play heading into Wednesday’s 7:30 p.m. road matchup against Edinboro.
In Wednesday’s win over Slippery Rock, Kevin Dodds added 16 points and Deante Cisero contributed 12 in the win. The two also combined to pull down 11 rebounds as Gannon finished with a 33-32 edge on the boards.
The Knights overcame a 27-19 hole in the first half and dropped 50 points in the second half while holding the Rock to just 22 points in the final 20 minutes.
Michael Tertsea led the defensive effort with four rebounds, two blocks and a steal along with two points to help the Knights hold The Rock to 49 points.
In Saturday’s win over Pitt-Johnstown, Johnson once again led the way offensively as he scored 26 points and added seven rebounds for the Knights, who went 6-for-6 from the free-throw line in the game’s final minute to seal the victory.
Saturday also was a time of celebration at the Hammermill Center as Gannon welcomed its Class of 2020 for induction into the university’s Athletics Hall of Fame.
The 2020 inductees were the 1985 men’s soccer team, men’s basketball standout Javar Cheatham, women’s basketball standouts Jen Papich and Brittany Tabron, softball player Jaime McLaughlin, football standout Jon Richardson and former women’s lacrosse player Stacey Reynolds.
Cheatham is Gannon’s all-time assists leader for his career and also owns the single-season and single-game marks in assists. Papich finished her career as the No. 7 leading scorer and ranks fourth in blocks, eighth in rebounds and fifth in steals.
Tabron wound up her career with 1,313 points, 891 rebounds and shot 53 percent from the floor. She was a starting forward on the 2009-10 team that reached the NCAA Division II national semifinals and took home the most outstanding player award at the Atlantic Regional that season.
Richardson rushed for 943 yards and scored 16 touchdowns during his senior year and still ranks third in all-purpose yards for a career at Gannon.
Following Wednesday’s matchup with Edinboro, Gannon’s next opponent will be travel to Greensburg for a game against Seton Hill at 3 p.m.