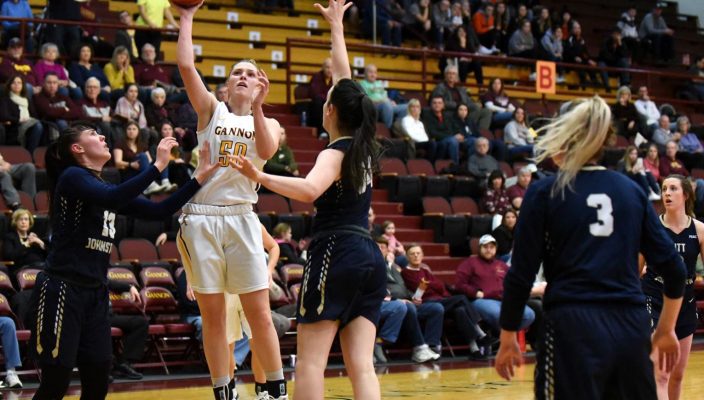 The Gannon University women’s basketball team kept its winning streak intact last week with two impressive wins over Pennsylvania State Athletic Conference West opponents, Slippery Rock and Pitt-Johnstown.
The Knights have now won six in a row and stand 17-4 overall and 13-2 in PSAC play heading into today’s 5:30 p.m. matchup at Edinboro.
Gannon tipped off the week with a Wednesday night game on the road against Slippery Rock (5-15, 3-11), one that saw the Knights come out on top, 69-66. Slippery Rock got on the board first, going up 3-0 early in the contest. However, these three points would be the only three that the Rock would score for the first six minutes of the game.
Gannon used an 11-0 run to jump ahead and take a 20-16 lead after the first quarter. Two 3-pointers from Chelsea Rourke helped the Knights grab a lead in the second quarter, but the Rock used a 12-7 run to close out the half and tie the score at 34-34.
The first five minutes of the second half quickly saw four lead changes as the two teams were trading baskets. Gannon’s defense then gave the team the spark it was waiting for as the Knights held Slippery Rock scoreless inside of the final 5:38 of the quarter to take a 52-41 lead into the final quarter.
Slippery Rock would then use two runs of 6-0 and 5-0 in the fourth quarter to give the Knights all they could handle, as the lead for Gannon dwindled to just one point at the 5:19 mark. However, a late free throw from Sydney Mitchell would secure the victory for Gannon.
Rourke and Tori Obenrader led the Knights in scoring, as they both poured in 15 points. Rourke shot 75% from three and also pulled in eight rebounds, putting her over 500 rebounds for her career.
Gannon then played host to Pitt-Johnstown (12-9, 7-8) on Saturday afternoon, and an impressive shooting performance – 52% from the field – fueled the Knights’ 10-point win.
The Mountain Cats scored first off the jump ball, but Gannon responded with a 9-0 burst sparked by five straight points by Obenrader. This 9-0 run forced UPJ to call a timeout with 6:41 remaining in the quarter.
Coming into the quarter leading 11-8, the Knights outscored the Mountain Cats 17-4 in the first five minutes of the second quarter to give them a 28-12 lead. Gannon slowed down a bit and would score just four more points in the half but still owned a comfortable 32-19 lead at the break.
Obenrader provided a 6-0 run of her own in the third quarter to give Gannon a 40-24 lead. Gannon’s bench stepped up in the third quarter, as Emily Poling and Sam Pirosko combined for nine points to help the Knights grab a 20-point lead heading into the final 10 minutes.
A 28-point fourth quarter for the Mountain Cats proved to be too little too late, as Gannon was able to hold on to the lead and extend its record to 12-1 in its last 13 games.
Obenrader and Haley Tewes each scored 13 points, and Tewes added 13 rebounds in the win.
Following Wednesday’s game at Edinboro, the Knights will be back in action at 1 p.m. Saturday at Seton Hill.

« Business students get Super Bowl experience Finding God on Gannon’s campus: Exploration vital to choosing a place of worship that feels like ‘home’ »