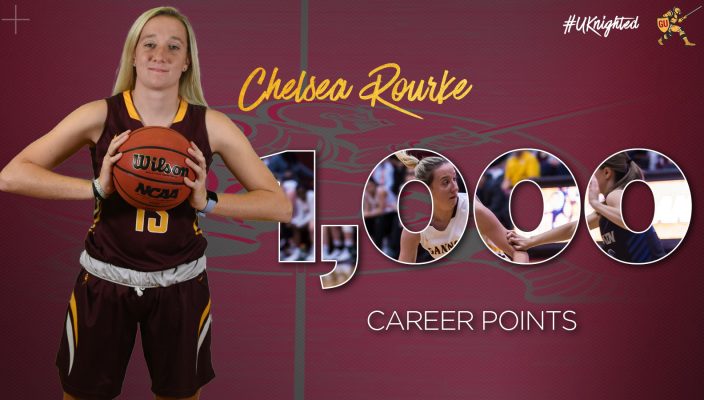 Senior Chelsea Rourke dominates on and off court

Gannon University’s Hammermill Center erupts with cheers as the announcer roars the name “Chelsea Rourke” at a recent women’s basketball game.
The standout senior hits a 3-point shot and races down the court in time to grab a rebound of a missed shot.
It’s a typical example of Rourke in action, according to those who know her best.
“She’s an unselfish player, a great shooter, a great rebounder from the guard position and she can score in a variety of ways – those are a package of what Chelsea is,” said Cleve Wright, the women’s basketball head coach.
“I couldn’t be happier with the kind of teammate and the kind of player Chelsea is.”
Just weeks ago, the 5-foot-10 Rourke hit a career total of 1,000 points, making her the 29th player in the program’s history to reach this milestone.
Rourke began playing basketball in middle school, in her hometown of Gibsonia, in the North Hills outside of Pittsburgh. Growing up, basketball has always been a constant for her. Rourke even recalled her favorite basketball memory during her senior year at Pine-Richland High School, defeating their rival team and jumping in the school’s swimming pool afterward, uniform and all.
Basketball taught her much more, though.
“I’ve learned a lot about myself, and I’ve learned a lot about other people,” Rourke said. “You have to have fun in everything you do, but at the end of the day it doesn’t make you.
“No matter how good of a basketball player you are, or how bad you are, it just doesn’t make you who you are as a person. It’s how you treat people.”
Asking her teammates about her, they say the same thing: Chelsea is selfless.
“She puts the team before herself and has a desire to win in everything she does,” said Faith Williams, a freshman point guard. “If I’m ever down, she’s there to pick me up and encourage me. She has shown me what true leadership is by showing my team and me unconditional support and love.”
Williams isn’t alone in thinking this, as teammate Delaney Dogan, a sophomore guard/forward said, “I know that even when she’s not on the team that she will be there for every one of us.”
Mentioning the recent passing of basketball legend Kobe Bryant, Rourke said although his death didn’t affect her personally, there was a lot of backlash surrounding the NBA players who decided not to play. She emphasized that a lot of people have a hard time understanding the bond basketball players form with each other and how surrounding the NBA players who decided not to play.
She emphasized that a lot of people have a hard time understanding the bond basketball players form with each other and how it is a community that she is very much connected to, which sets it apart from other relationships.
With coaching staff changes and conflict, Rourke has experienced hardships that she said only made her closer with her team.
“People don’t understand the connection or the bond you have with teammates,” Rourke said.
“People don’t understand the time commitment you have to put in or how certain people on your team and on the staff treat you.”
Rourke has been a solid contributor throughout her stay at Gannon.
So far on the season, she’s averaging nearly 12 points per game – second on the team to Tori Obenrader – and also is contributing four rebounds per game while averaging a team-best 30.9 minutes per outing.
An All-Pennsylvania State Athletic Conference West second-team selection as a junior, she averaged 12.6 points per game along with 4.5 rebounds and nearly two steals.
She was fifth in the conference in minutes played and fourth in the league in blocks per game at 1.42.
During her sophomore season, she averaged 11 points per game, and as a freshman she finished second on the team in made 3-pointers and blocks and wound up third in assists and steals.
This year has been Wright’s first year back at Gannon as head coach after a six-year absence, but time and time again throughout the year, he tells his players their primary goal is to love their teammates.
He said Rourke does just that — on and off the court.
Rourke decided to enroll at Gannon for the nursing program rather than her love for basketball.
Looking into her future, she has given basketball some thought and although it will always be a part of her, her goal is to help people in a different way now.
Upon graduation, Rourke will be employed at Saint Vincent Hospital on the medical-surgical oncology floor.
“You hear these stories all the time of ‘Oh this nurse was really, really great, and I’ll always remember this nurse,’ or ‘My hospital stay was so bad because of this nurse or healthcare professional,’” said Rourke.
“I want to be that good impact for people.”
Chelsea Rourke has left her impact on the Gannon women’s basketball team and continues to strive for the best as she graduates. See her play before the season ends and be part of the legacy she leaves.