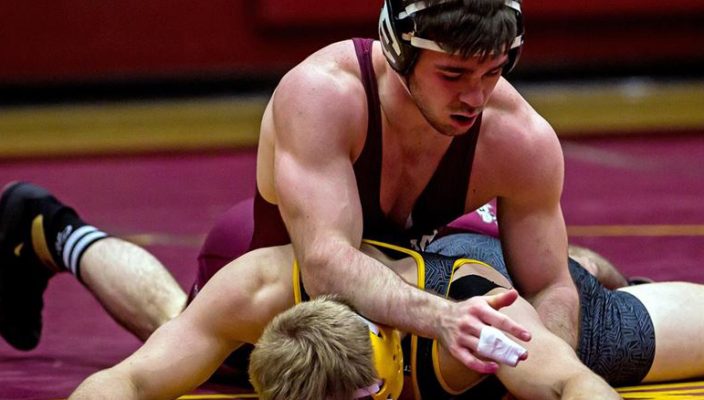 Over the weekend, the 21st-ranked Gannon University men’s wrestling team was able to secure road wins against No. 17 Kutztown and East Stroudsburg.
The victories left the Knights with an overall dual meet record of 6-5 and a 4-1 mark in Pennsylvania State Athletic Conference dual meets.
Gannon will step out of conference action this weekend and travel to take on Lake Erie at 7 p.m. Saturday in a nonconference battle.
The Knights will return to conference competition at 7 p.m. Tuesday at rival Mercyhurst.
Gannon’s first victory of the weekend came Saturday against host Kutztown at Keystone Arena.
The match started out even at 3-3, as Gannon’s Jacob Dunlop – ranked second in the region — opened with a 9-3 decision at 125 pounds over Joe Renne, ranked fourth in the region.
Another matchup of regionally ranked competitors followed as the Knights’ Austin Hertel — ranked third — lost a close battle to fourth-ranked Collin Wickramaratna at 133, a match decided by riding time.
Gannon’s Nick Young then turned the tide, as he posted an 11-3 major decision over Michael Albergo at 141 pounds.
The Knights’ Dom Means, ranked third in the region, followed with a tight 3-2 decision over Michael Cusick, ranked fifth at 149, to keep the ball rolling, and the momentum turned into seven straight wins — with six coming by bonus.
Evan Fisler (157) and No. 8 Alex Farenchak followed with major decisions at 157 and 165, respectively, for Gannon, and the Knights then posted three straight pins – Luigi Yates at 174, Joel Leise at 184 and Jud Ramage at 197.
Gannon got some payback in a big way against the Golden Bears, who handed the Knights their only PSAC dual defeat with an 18-17 victory last year.
The Knights continued this momentum into the following day against East Stroudsburg.
Gannon won eight out of 10 bouts for the second straight day. Three of those wins came by bonus, including a forfeit by Paul Cantafio at 125, a first-period fall from Means at 149 and a major decision out of Farenchak at 165.
The Knights won by decision, all by at least two points and overall by an average of nearly four points.
Means, Farenchak, Young, Fisler, and Ramage all went 2-0 on the weekend. Ramage, Fisler and Farenchak are unbeaten in PSAC duals this season.
Through five PSAC duals this season, Gannon is outscoring opponents 165-48. Dating back to last season, each of the Knights’ past nine PSAC duals have either been decided by one point or a 20-plus-point margin in favor of Gannon.
Following Tuesday’s meeting with rival Mercyhurst, the Knights will have just one PSAC dual meet remaining, and that will come Feb. 15 at Pitt-Johnstown. The Mountain Cats currently own the PSAC dual-meet lead at 5-0 while both Gannon and Mercyhurst are 4-1.