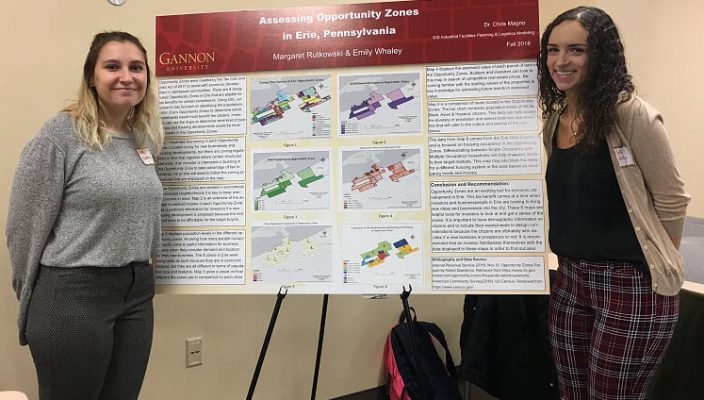 Eight students from professor Christopher Magno’s Geographic Information Software (GIS) classes will be presenting their final projects at 6 p.m., Thursday, Feb. 13, at the Jefferson Educational Society.
The presentation will showcase various mapping projects the students have created with GIS over the last few semesters.
Over the course of a semester, students in the GIS Spatial Justice course have worked on projects to benefit the Erie community.
These projects take the form of data maps, which have mapped the locations of different things, said Magno, who has a doctorate in criminal justice and is an associate professor of criminal justice.
The software and the students have mapped the locations of security cameras, streetlights and trees, anything that will benefit the community. Working with the community has become a large part of the course.
In instruction, Magno said he uses data from the community, not from a textbook. This makes it more exciting and interesting for the students, and the community appreciates it too.
Even the purpose of the presentation is to bring benefit to the community.
“The primary goal of the presentation is to let the Erie community know that this exists, from crime to poverty,” Magno said.
With awareness about locations of crimes and poverty comes attention to the issues.
“With the community and public officials being aware of these problems, they can address them and make it more obvious,” Magno said.
“They cannot solve all problems of crime and poverty, but if you can find the hotspot of crime and poverty, you can mobilize your resources and see what needs more attention.”
Students’ presentations for the Jefferson Educational Society will include maps for potential solar roofing on various Erie buildings, possible locations for reducing energy and looking at food deserts and poverty in the area.
“One of the projects that’s really striking that one student is presenting on students’ school to home and home to school routes,” Magno said.
This project focuses on the safety of routes students use to get to and from various elementary schools, Qusai Abdel Wahab, a sophomore criminal justice major, said.
Abdel Wahab was one of the students who worked on this specific project and will also be presenting about it Feb. 13. He focused on Pfeiffer-Burleigh Elementary School, where he and other students took surveys with the GIS collection app and imported data to another program to analyze.
From there, they identified spots with high crime and poor conditions along various routes, he said.
Various unsafe conditions were found along these routes. A prison release housing program was found along one of the routes he examined, Abdel Wahab said. Even with this being his only find, he said he thought that this was an important project.
“I think it’s a positive thing to look at to keep students safe going to school,” Abdel Wahab said.
“I think it’s important every student goes to school. I also think it’s important to keep students safe during school hours.”
This wasn’t the only thing Abdel Wahab got out of the course. He now has an internship after his GIS software experience.
At the beginning of the semester, Magno emailed several students, including Abdel Wahab, about an internship opportunity and he decided to pursue it.
“I thought it would be nice to be engaged with the community,” he said.
This wasn’t the only internship Magno said he has helped facilitate. Community, government and private agencies ask for help in mapping their data from Gannon’s GIS students, and this often turns into paid internships for students, Magno said. Students start GIS courses often completely unfamiliar with the program, but over the course of the semester, that quickly changes.
“GIS is just another tool, and it sounds so overwhelming and technical, but it’s user-friendly and easy to use,” Magno said.
“Students got hooked on it and take every GIS course.”