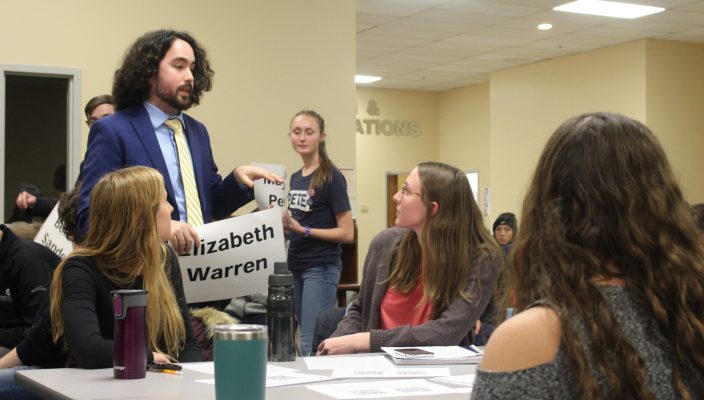 Gannon University’s School of Public Service and Global Affairs hosted its inaugural Iowa Caucus Simulation Monday on the third floor atrium of the Palumbo Academic Center.
The simulation is meant to emulate the real Iowa Caucus of the same day.
The Iowa Caucus is considered one of the first battlegrounds for presidential candidates, and the event occurs every election year.
Despite the fact that its origins and prediction reliability are dubious at best, the caucus represents an important event in the election cycle, as many low scoring candidates drop from the race.
The caucus itself is a chance for delegates of the candidates to present their campaign’s message to townhalls across the state, all the while giving citizens the chance to ask questions about the candidates’ platforms. This process is known as caucusing.
After the caucusing has concluded, citizens would stand by the candidate’s representative to indicate their support. These numbers are then tallied across the state, and a “winner” is declared.
However, it is important to note that this is not a primary election and does not determine who the party’s presidential candidate will be.
However, Gannon’s own event put its own spin on this idea to not only assist in informing students about the candidates but add a bit of fun as well.
Jefferey Bloodworth, Ph.D., dressed as Alexander Hamilton in Converse, opened the event explaining the inspiration behind the event: “Offering students the ability to engage with the 2020 presidential election in a civil, informative environment.”
Nathaniel Ropski, an adjunct professor, followed Bloodworth and explained the rules of the caucus.
The simulation allowed for more candidates to be represented than the real Iowa Caucus, and students were limited to voting for the candidates being represented, while the real Iowa Caucus offers avenues to indicate support for other unrepresented candidates.
Following Professor Ropski was Abraham Lincoln, Attorney (Peter Agresti) to introduce the speakers.
Here is where the event most differed from the actual caucus.
The event allowed the student presenters to act as the candidate, or a representative of their candidate.
With a total of two Republicans and 10 Democrats being represented, this divergence from the real Iowa Caucus offered an opportunity for the students to bring a passion to their speeches.
Max Fulmer said one thing that stood out was watching “Lady Liberty,” portrayed by Sam Mason, burning people who went over their time limit.
He said that really served to break up the political rhetoric.
“I learned a lot about the field of candidates, but watching Lady Liberty chase Donald Trump (Andrew Caswell) and Bernie Sanders (Nathan Manion) off the stage would give anyone a laugh,” Fulmer said.
Following the speeches, the audience was asked discuss the candidates at their tables as the students walked around and talked about their candidates.
After, the audience was asked to vote for their favorite candidate.
However, candidates had to first obtain 15% of the vote to progress on to a secondary round of voting.
Once the first round concluded, only the students representing Mayor Peter Buttigieg (Cassandra Carr), Michael Bloomberg (Heather Zelcs) and Sen. Bernie Sanders (Manion) were left standing.
Following the second round of voting, Bloomberg was declared the winner of the School of Public Service and Global Affairs first Iowa Caucus Simulation.
In a follow up email after the event, Bloodworth indicated that he hoped to continue this tradition in the next presidential cycle as well.
Also, Bloodworth revealed that attendance for the event was around 120 people, making it one of the largest PSGA event sto date.
The success of Gannon’s event may come as ironic, given that the real Iowa Caucus, which was conducted the same night of the event, ended in turmoil as a technical error prevented votes from being tabulated.
For the first time since its inception, it is unclear who the winner of the Iowa Caucus is.
Some experts are speculating that the results will be postponed indefinitely given the amount of time that has passed since the caucus ended.