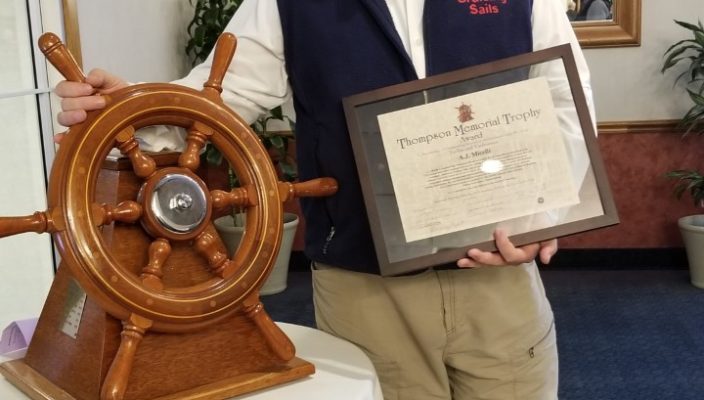 Gannon University sailing team coach AJ Miceli was awarded the Erie Yacht Club’s Thompson Memorial Trophy for his “outstanding service and achievement in the world of yachts and yachtsmen.”
Miceli, former chairman of the university’s communication arts program and later director of the newly created School of Communication and the Arts, was recognized for the work that he has done with the Gannon University Sailing Team, otherwise known as GUST.
Miceli created the sailing team back in 2014 as a way to share his love of sailing among many of the Gannon students who have been or are now a part of the organization. He currently serves as the team’s coach.
Now, the sailing team has 20 students who participate in events against several different schools, notable ones including Cornell University, Ohio State University, the University of Michigan, Penn State University, and Syracuse University.
The sailing team is a group of students with a common interest that helps them to learn more about teamwork, good sportsmanship, and the art and skill of seamanship not only on but also off of the water.
Austin Detzel, a freshman Cyber Engineering student and one of the 20 members of the Gannon University Sailing Team, decided to join the team back at the beginning of the year. Throughout his membership with the sailing team, Detzel has had the opportunity to not only learn how to sail and the science behind it, but also travel to several different locations in order to compete against some of the schools mentioned previously, like Cornell.
Detzel enjoys being out on the water and fine-tuning some of his sailing skills thanks to Miceli’s help.
Detzel recommends anyone interested in sailing and being out on the water to join the team and compete.
Along with his dedication to the sailing team, Miceli was also recognized for “his long-time participation in the Erie Yacht Club Racing Fleet” and his sailing company, American Cruising Sails.
On top of that, he was also acknowledged for his role in developing the Battle of Lake Erie Intercollegiate Regatta, which is now known as the Intercollegiate Sailing Association.
Miceli is very happy to have been able to be a part of developing the collegiate sailing not only at Gannon, but throughout the community as well.
“I am most pleased to have played a part in developing collegiate sailing at Gannon and in Erie,” Miceli said. “I’d like to recognize the generous support of Gannon University, the Erie Yacht Club Foundation and the members of the Erie Yacht Club in the development of the program, which exposes students to an exciting sport that they can participate in for the rest of their lives.”