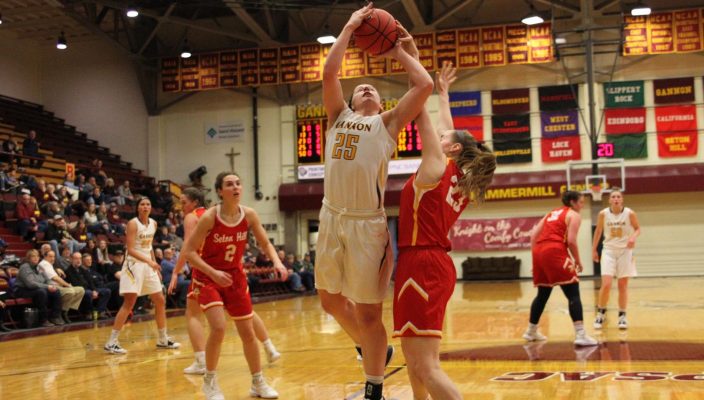 The Gannon University’s women’s basketball team did not miss a beat this week, winning two conference games against California University of Pennsylvania and East Stroudsburg.
These two wins extended the Knights’ winning streak to four games, including wins in 10 of their last 11 contests, and left them 14-4 overall and 10-2 in Pennsylvania State Athletic Conference play going into Wednesday’s 5:30 p.m. road matchup with Slippery Rock.
The Knights started off the week by defeating Cal U (13-5, 7-5), 66-40, on Jan. 22, a game in which Gannon’s efforts on defense paved the way to victory. The Vulcans were held to under 25% shooting from the field, and scored under 10 points in three of the four quarters.
Early in the second quarter, Chelsea Rourke knocked down a 3-pointer that turned out to be the start of a 17-4 run in favor of Gannon. The Knights proceeded to hold Cal U scoreless from the 6:24 mark in the second quarter until just two seconds remained in the half. Gannon used this incredible defensive effort to hold the Vulcans to just 17 points in the first half, as the team led 30-17.
The Knights held Cal U to another scoreless drought, not allowing a basket inside of the last four minutes of the third quarter. Gannon’s Tori Obenrader scored the final six points of the quarter, one that saw just six Vulcan points. The Knights led 46-23 heading into the final quarter.
Gannon put this game away inside of the final 7 minutes, 20 seconds, outscoring Cal U 18-7 to solidify the victory. Obenrader scored 19 in the winning effort, while Rourke shot 4-of-6 from 3-point range, adding 15 points of her own.
The Knights then went on to pick up another conference win against the second-place team from the east, East Stroudsburg, 57-51, on Saturday.
This contest was one that kept the crowd at the Hammermill Center entertained, as it saw 17 lead changes. Gannon finished the game a solid 14-of-18 from the free-throw line, as the Knights used this to pull away from the Warriors (13-6, 9-4) down the stretch.
This contest saw seven lead changes in the first quarter alone, as the teams exchanged runs back and forth. Five straight free throws from Obenrader and Rourke allowed the Knights to tie the game up at 12-12 at the end of the first quarter. Seven additional points from Obenrader in the final minutes of the half helped Gannon take a 28-24 lead into the locker room at halftime.
The third quarter saw the least amount of scoring for the Knights, as they tallied just 10 points and were held scoreless for just over three minutes. However, two driving layups from Boston McKinney and Rourke tied the game at 38-38 heading into the fourth.
The fourth quarter saw four more lead changes, as these top PSAC teams exchanged blows back and forth. Obenrader nailed a three with 5:31 left in the quarter that sparked the Knights to a 7-0 run. A Rourke 3-point play would go on to secure the win for Gannon after the Warriors were able to cut the lead to just one. Rourke hit two more free throws and Obenrader made one to end the game for the Knights.
Obenrader recorded a game-high 21 points and 13 rebounds for her fifth double-double of the year. McKinney and Rourke also each contributed 13 points to the winning effort.
Gannon sits in second place in the PSAC West, two games behind the sixth-ranked team in the country, Indiana University of Pennsylvania.
Following Wednesday’s meeting with Slippery Rock, the Knights will host Pitt-Johnstown at 1 p.m. Saturday at the Hammermill Center as part of the Gannon Athletics Hall of Fame doubleheader.