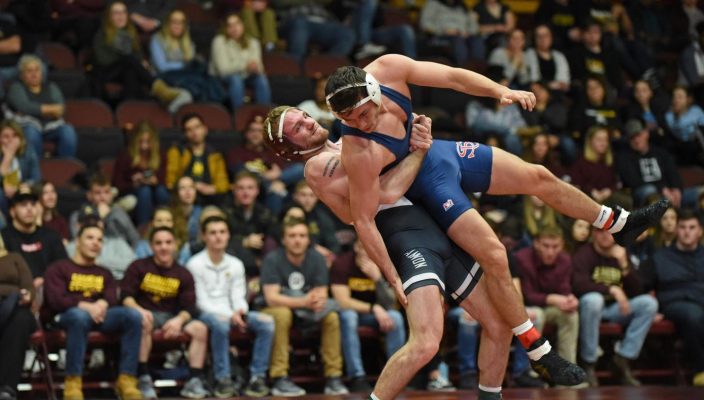 The 21st-ranked Gannon University men’s wrestling team got off to a hot start and never cooled off, steamrolling Shippensburg, 40-6, Friday at the Hammermill Center.
Gannon improved to 4-5 overall in dual meet action and 2-1 in PSAC dual meets. The Knights will look to improve on both counts when they travel to take on Kutztown at 6 p.m. Saturday.
The win over Shippensburg was made a little easier by the fact that the Knights received two forfeit victories in the first two weight classes. Jacob Dunlop, at 125 pounds, claimed the easy win, and Austin Hertel did the same at 133 pounds.
The first contested match came at 141, where Gannon’s Nick Young posted a major decision over Shippensburg’s Matt Milbrand, 13-3. Young is the region’s fourth-ranked wrestler in his weight class while Milbrand is No. 6.
The Knights’ Dom Means, ranked No. 12 in the country, built a 4-2 lead at 149 pounds, but Shippensburg’s DeAndre Reed tied it in the third period before Means accrued more than 90 seconds of riding time to come away with a narrow 5-4 win.
Gannon’s Evan Fisler, ranked second in the region, kept up the winning ways at 157, posting a 13-4 major decision over Pat Duggan, ranked fifth in the region.
The Knights’ Giovanni Ciotti, making his dual-meet debut on the season, came away with a 2-0 victory at 165 pounds.
At 174, Luigi Yates got off to a strong start, building an 8-0 lead in the first period, and wound up posting a win by technical fall in 4 minutes, 49 seconds.
The Knights’ Joel Leise collected his team’s only pin of the evening, as he stopped Shippensburg’s Alex Klucker at 4:30 in their 184-pound matchup.
Freddie Nixon, ranked No. 1 in the region and No. 5 in the country among Division II wrestlers at 197 pounds, outlasted Alexi Castro, 3-1, for Gannon’s final win of the meet.
The Knights’ Gehrig Hutchison was pinned in 3:29 by Shippensburg’s Derek Berberick, the nation’s 10th-ranked heavyweight, at 285 pounds.
Following Saturday’s match at Kutztown, the Knights will return to action in a hurry as they take on host East Stroudsburg at noon Sunday.