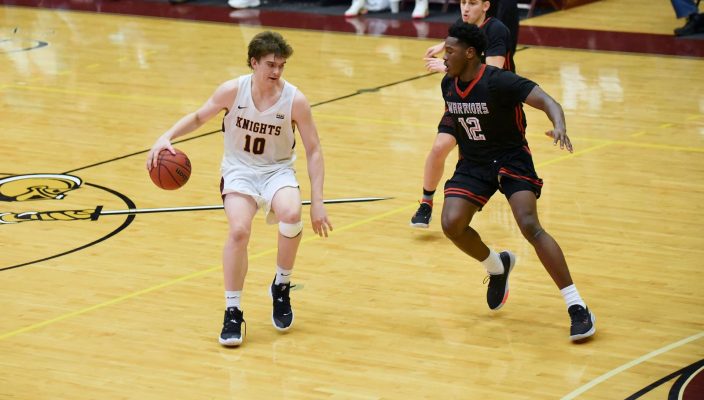 The Gannon University men’s basketball team came out of the weekend with a 7-6 record in Pennsylvania State Athletic Conference play after losing to California University of Pennsylvania and defeating East Stroudsburg.
The Knights hosted Cal U on Jan. 22, and wound up losing, 68-64. But, they rebounded to beat East Stroudsburg, 61-48, Saturday in the Coaches vs. Cancer matchup. Both games were played at the Hammermill Center.
The split left Gannon 8-9 overall going into Wednesday’s 7:30 p.m. matchup on the road against Slippery Rock.
In the loss to Cal U, Gannon controlled the pace early, running out to a 7-0 lead by the 17:45 mark. The Knights quickly stretched their edge into double digits, 12-2, after Matt Johnson had a drive to the basket for a layup. California pushed back, chipping the deficit down to one, 19-18, with 10:15 to play in the half.
Victor Olawoye answered for Gannon, knocking down a triple to stretch the lead back up to five, 23-18, at the 6:28 mark. Gannon went on to take a 33-29 lead into the intermission.
The Knights opened the second half with a 10-3 run to increase their lead to 11, 43-32.
Olawoye fueled the streak for the Knights connecting on two triples. But California was able to pull back within three, 43-40, by the 14:44 mark. The Vulcans wouldn’t go away and locked the contest, 47-47, after connecting on a triple.
Gannon then looked to put the game away, constructing a 7-2 run that featured five points from DeAnte Cisero to make the score 54-49 with 7:54 to play.
Both teams then traded possessions until California was able to score on back-to-back possessions and steal its first lead of the contest, 64-62, with 37 seconds to play. The Vulcans closed out the remaining time seal the win, 68-64.
Olawoye netted a career-high 24 points with a career-best eight rebounds. He also matched a career-high four steals and added one block and one assist in the loss.
Cisero was also able to notch double digits for the ninth straight game with 19 points.
Gannon then faced off against East Stroudsburg to get a bounce-back win.
The Knights came out shooting, opening up an 8-3 edge after Chris Clancy buried a three at the 16:15 mark. The Warriors battled back with the use of full-court pressure to lock the game, 11-11.
Gannon responded with six unanswered points to make the score 17-11 with 7:52 on the clock. Frank Webb fueled the run with four points, while Michael Tertsea added a dunk.
The Warriors forced several Knight turnovers to pull back within two, 19-17. Gannon went on to close the half on an 8-3 run to take a 27-20 lead into the locker room.
Gannon opened the second frame strong, increasing its lead to nine, 31-22. Coming out of the media timeout, the Knights rattled off seven straight points to stretch their lead into double figures, 38-28.
Gannon then started to control the pace, growing its largest lead of the game, 55-39, after Johnson netted a pair of free throws.
East Stroudsburg made one last push with a 6-0 run to cut the edge to 10, 55-45, with 1:58 to play. However, Gannon closed out the remaining time by converting six straight free throws to earn the win, 61-48.
Kevin Dodds tallied his first career double-double with a career-high 11 rebounds and 11 points. He connected on 5-of-6 shots from the field and added one steal.
Following Wednesday’s game at Slippery Rock, the Knights will return home to host Pitt-Johnstown at 3 p.m. Saturday in the Hammermill Center. It’s part of the Gannon Athletics Hall of Fame doubleheader.