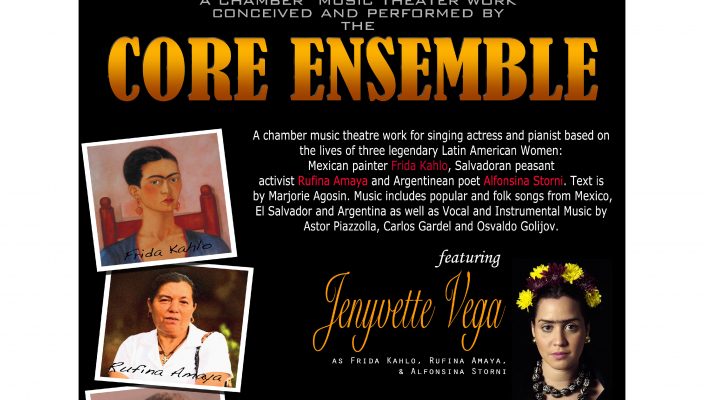 As the second installment of Erie Fringe Fest, Schuster Theatre and the foreign language department will present “Tres Vidas,” a one-woman show celebrating and paying tribute to three prominent Hispanic women: Frida Kahlo, Rufina Amaya and Alfonsina Storni.
This one-night performance will take the stage at 8 p.m. on Friday and is free for all in attendance.
Jenyvette Vega, an actress, singer and dancer raised in Puerto Rico, will be starring, with Alfonso Hernandez accompanying her on the piano.
The two belong to The Core Ensemble, a traveling chamber music group that harbors a deep commitment to demographic and geographic diversity.
Jenyvette will embody each of the three women by sharing their defining moments.
Kahlo (1907-1954) is one of the most notable Latin American painters. Though she was seriously injured in a trolley accident at age 19 and partially disabled for the rest of her life, she continued painting prolifically.
Kahlo’s works explore themes of identity, gender and class in postcolonial Mexico. Her paintings, especially her self-portraits, incorporate elements of folk style and are known for their frankness and strength.
Amaya (1943-2007) was the sole survivor of a brutal massacre in El Mozote, El Salvador in 1981, during the country’s bloody and tumultuous civil war.
Over 700 civilians were slaughtered as part of the Salvadoran army’s quest to control the populace through fear and intimidation. The particular unit that carried out the attack was trained by U.S. advisers.
Amaya’s story of survival was met with skepticism; both the U.S. and Salvadoran governments denied that a massacre had ever taken place.
Amaya dedicated the rest of her life to activism for the poor and disadvantaged. The courageous reporting of journalists Alma Prieto and Mark Danner finally began to reveal the true story of the massacre, and definitive proof emerged in the 1990s when a forensics team entered El Mozote and verified Amaya’s story.
Alfonsina Storni (1892-1938) is Argentina’s most popular female poet. She composed a vast repertoire of poetry and newspaper columns, many of which critiqued the subordination of women in society.
Storni was the first female writer to be accepted as an equal in the literary circles of Buenos Aires.
“Tres Vidas” recounts the struggles and triumphs of these three women through music. The show features many diverse musical styles, including popular and folk songs of Mexico, El Salvador and Argentina.
Abigail Paulson, program assistant in the Communication Arts department, is eager for this show to take the stage.
“It’s wonderful that Schuster Theatre and the foreign language department are holding hands with this collaboration,” Paulson said. “The show is a great opportunity for students in all disciplines to deepen their knowledge of these really important women.”
Tickets can be reserved online at gannon.edu/schustertheatre. Seats are likely to fill, so it is advised to reserve your tickets in advance.
Any unclaimed reservations will be released to the public at 7:45 p.m.
Upcoming Fringe Fest productions include “I Am Hamlet” and “The Wolves.”