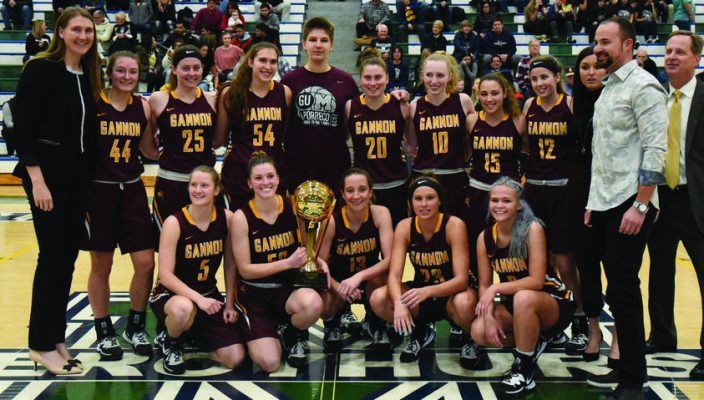 Driven by Tori Obenrader’s second double-double in as many games, the Gannon University women’s basketball team defeated crosstown rival Mercyhurst, 61-46, in the Porreco Pride of Erie Games Saturday at Mercyhurst.
The victory improved the Knights’ overall record to 13-4 and left them 9-2 in Pennsylvania State Athletic Conference play heading into Wednesday’s 5:30 p.m. matchup against California University of Pennsylvania at the Hammermill Center.
Gannon currently sits in second place in the PSAC West, two games behind Indiana University of Pennsylvania and two games ahead of both Cal U and Seton Hill.
A 21-point first quarter, started by an 8-0 run, helped the Knights get off to a hot start early against the Lakers, who fell to 4-13 overall and 4-7 in PSAC play.
Gannon also flexed its muscles on defense in the first quarter as well as throughout the game, allowing just eight points in the first and holding Mercyhurst to 32% shooting from the field throughout the contest.
The Knights used another 9-0 run in the second quarter to extend their lead to 22 points before a Laker basket cut the lead back to 20 points. Boston McKinney started this run with a 3-pointer and a driving layup of her own.
The third quarter of the game saw less scoring from both teams, as the Knights tallied 13 and the Lakers posted 12. A 3-point play from Obenrader and a free throw from Haley Tewes gave Gannon a 49-30 lead heading into the fourth quarter.
Mercyhurst used consecutive threes to cut Gannon’s lead to 17 after the fourth quarter media timeout.
However, it would not be enough for the Lakers as the Knights would hold on and grab their second consecutive win in the rivalry. Gannon has also won four of the last five meetings in this matchup.
McKinney, Tewes and Chelsea Rourke also added double-digit scoring efforts in the win to go along with Obenrader’s 14 points and 11 rebounds.
McKinney and Tewes each finished with 11 points while Rourke contributed 10 points.
Obenrader converted six of eight shots from the floor and was tabbed the PSAC West defensive player of the week, her fourth weekly award of the season.
Gannon has lost just once the past month, falling to nationally ranked IUP, 62-48, on Jan. 11. The Knights have won eight of nine during that stretch.
Following Wednesday’s game, Gannon will return to action at 1 p.m. Saturday against East Stroudsburg.

« Toss a coin to ‘The Witcher,’ now a Netflix Original Looking back on a career: Matt Johnson in perspective »