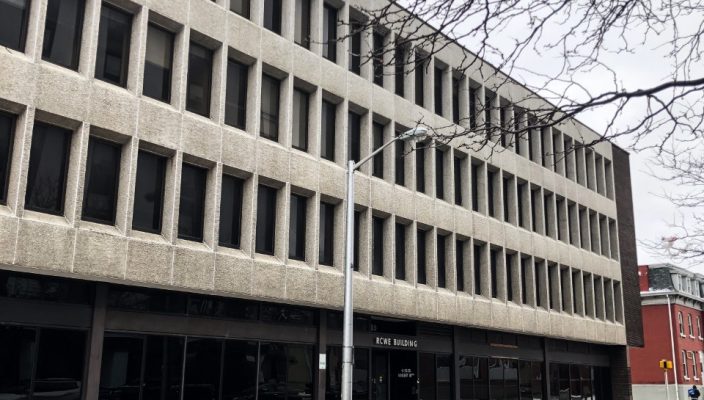 Gannon University’s latest plans for expansion comes in the form of a newly purchased building on the corner of Eighth and Sassafras streets, the RCWE building. Closing will take place on Feb. 1.
Terms for the sale were agreed upon in December, Doug Oathout, Gannon’s chief marketing and communications officer, said. From there, the design process to figure out what the building will look like when it’s finished will begin. The goal is to have the design completed within the first half of the year in order to assemble a project timeline.
The building is being purchased for the use of apartment-style resident housing that will accommodate 80 to 100 beds in the four-floor space. Extensive repairs are required in addition to implementing the design. There is no budget set yet for this project, and it will remain this way until a design can be established.
Alongside the building, Gannon will acquire a 100-space parking ramp, which will also require repairs.
“You know Gannon could use the parking,” Oathout said.
No other campus expansion is planned right now. Other opportunities will be considered as Gannon determines its next step in affecting the campus and surrounding community.
“Resident halls are something we need to keep in mind as enrollment numbers continue to grow,” Oathout said. “We want to keep providing students with good housing options.”
The previous owner left the building and has been trying to sell it. The 40,000-square-foot building had been on the Gannon radar for a couple years, he said. The building, built in 1969, has been for sale for at least two years.
Currently, the building has one tenant, Civil Service, which is a government agency. It has not yet been decided what will happen with the tenant once the purchase is complete.

“We are willing to work with them,” Oathout said.
Jan Logsdon, a senior psychology major, had previously read about the upcoming purchase, and she said she was glad to see it coming.
“I think it’s exciting because I know that a lot of students wanted more housing options, especially with bigger and bigger freshman classes,” Logsdon said. “And the location option would be great for classes.”
She also said that since the building needed to be renovated, it was a great opportunity to add some great things to the building.
“From my experience in several other buildings, I think they should include central air, and a decent number of washers and dryers would be important.”
Stephanie Rimer, a junior nursing major, shared Logsdon’s feelings.
“It’s exciting that there will be more housing options for students, especially since it’s closer to academic buildings,” Rimer said. “I hope they make it like Harborview. I think that students would really like that, because it would give them another apartment-style choice.”
Sophmore nursing major Meryl Gartland said she was most excited to hear that it was going to be apartment-style as opposed to a more traditional college residence hall.
She said when she was looking for her sophomore year housing, she really wanted the opportunity to have her own kitchen and living room space.
“I think other students aren’t really going to want another building like Wehrle,” Gartland said.
She also said she thinks an additional building will help alleviate stress for many students during the housing stage of the semester.
“I only got this place by chance,” she said. “I was supposed to be in the bottom floor of Lubiak with two girls I didn’t know. I got really lucky in the end.”
Logsdon was also happy to hear about the adjoining parking ramp.
“I wish they got that when I was younger,” she said, unsure if she’ll get a spot in a parking lot for this semester.
Rimer, though, was a little more concerned regarding the ramp.
“I hope they keep it as a parking garage for students, because there is barely any on-campus parking for students,” she said.
Only time will tell what the building will look like in the end as the university works to complete the project in the next few years.
Not only will the new building grow campus, but it will create another linkage to the surrounding Erie community.
ALEXA ROGERS
rogers034@gannon.edu