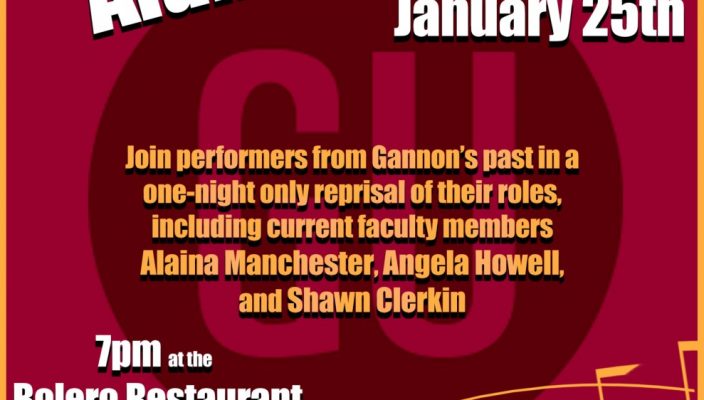 Schuster Theatre will be hosting an alumni cabaret Saturday evening to cap the second week of classes.
The event will be held at the Avalon Hotel’s Bolero Restaurant, located at 16 W. 10th St. Patrons can order food and drink while they enjoy performances by alumni and current students.
Three performers who have the special distinction of being both alumni and faculty include the Rev. Shawn Clerkin, Alaina Manchester and Angela Howell.
Howell is an assistant professor in the theatre department as well as the technical director of Schuster Theatre.
Her passion for behind-the-scenes work blossomed during her time as an undergrad. She typically asked for small parts in the ensemble so she could focus her creative energy on making the costumes.
Two of her favorite shows as a student were “Cabaret,” since it was her first time spearheading costume design, and “Moby Dick the Musical,” because of its outrageous and silly appeal.
After gradutation in 2005, Howell worked a plethora of jobs, including on a Disney cruise line, before finding her way back to Gannon.
“I’ve come full circle,” she said. “Teaching is showing me all that I still have left to learn, as well as how much I have to share.”
Her role in the cabaret is under wraps, but she promises that audience members are in for an entertaining show full of exceptional voices.
“I have to mention that the majority of Erie theaters are run by and employ Gannon theatre alumni, all of whom will be performing,” she added.
Two current students who will be performing alongside alumni include Camryn Grey and Brady Bizon.
Grey, a junior pre-med/math major, was asked to participate in the cabaret by recent alumna Lauren Sovisky.
“Lauren’s last show was ‘Big Fish,’ and she asked me and Rebecca [Ropelewski] to sing a song from that show with her,” Grey said.
The trio will be reprising “Little Lamb from Alabama.”
Grey is also eager to watch the numbers featuring Clerkin and Manchester.
“There’s something special about watching the people who have directed and inspired you perform,” she said.
Bizon is a sophomore physician assistant major who has found a second home among the theater community.
He will be singing a number from the hit musical “Into the Woods,” where classic fairytales collide to create a new story.
Like Grey, Bizon is also excited to watch his Gannon theater mentors take the stage.
“I can’t wait for the duet between Angela [Howell] and Alaina [Manchester]. But it’s a secret, so I guess I have to wait to find out,” Bizon said with a chuckle.
Tickets are $5 for students, faculty and alumni and $7 for the general public. Tickets can be reserved online through Friday at www.gannon.edu/schustertheatre and then paid for at the box office. Cash and GU gold are the only accepted payment methods.
Doors open at 6:30 p.m. and the cabaret officially begins at 7 p.m. Any unclaimed reservations will be released to the public at 6:45 p.m.
Contact Abigail Paulson via email at paulson002@gannon.edu with any questions.