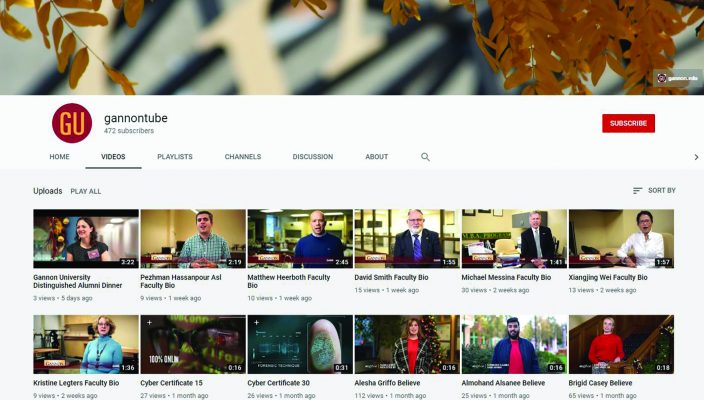 Many know about Gannon University’s Instagram and Facebook pages, but that isn’t the only social media that Gannon is active on. Gannon has its own YouTube channel named “gannontube.”
With almost 500 subscribers, the channel has been actively uploading videos for several years, joining the website Nov. 30, 2007. Since then, the channel has gained almost 900,000 views. Most of the channel’s videos have been posted within the last two years.
On the channel, you can find a variety of videos. Within the last few months, most videos have been faculty bios, student perspectives and a welcome message from the dean of the College of Humanities, Education and Social Sciences.
It’s described as the official YouTube channel of Gannon. Because of that, its videos represent voices in the Gannon community.
In December, Brigid Casey, a senior political science student, became one of many community voices featured on the channel. As part of the “#Believe” series during the holidays, she wished her family, friends and soccer team a merry Christmas. Before filming the video, she wasn’t even familiar with the channel.
“Prior to being in a video I didn’t know there was a YouTube channel, but since then I’ve explored the page,” Casey said.
After exploring, she decided to subscribe. She even got her parents to subscribe. She said it’s something she’s proud to see her university do.
“I liked to see the diversity of students that they interviewed for things,” she said. “They’re from all walks of life, different clubs, cities, counties. That’s something I like to see from my university.”
Even beyond the contents of the channel, Casey said filming was fun, too. It became a great experience.
A few months before Casey’s video appeared on the channel, Kara Purpura, a junior history major, spoke in a video. In this, Purpura discusses what she is thankful for, specifically sending a message to her hometown of Buffalo, N.Y.
She filmed her video in October on AJ’s Way, which had almost 20 takes.
“I thought it was a really fun experience ultimately and everyone was super nice,” Purpura said. “I saw my face on a billboard; a co-worker saw it first, actually. Still, I never thought I’d see my face on a billboard. I showed it off to my family.”
Despite a strict avoidance of her video out of embarrassment, Purpura said she has watched a few other videos on Gannon’s YouTube channel.
“I watched some other ‘#Believe’ videos because my friends were in them, but normally I usually just watch the videos they post on Instagram.”
Even with her preference of Instagram, she said she really liked Gannon’s channel and the ideas behind it, especially the channel’s variety of videos.
“I think it’s a cool way for people to learn about Gannon and really get to know it,” she said.
“It’s not just graduation rates, but it’s what actual students think of the school – in their own words.”

« Movie reminds student to enjoy life, for it flies like the wind Regrets of not pursuing theater »