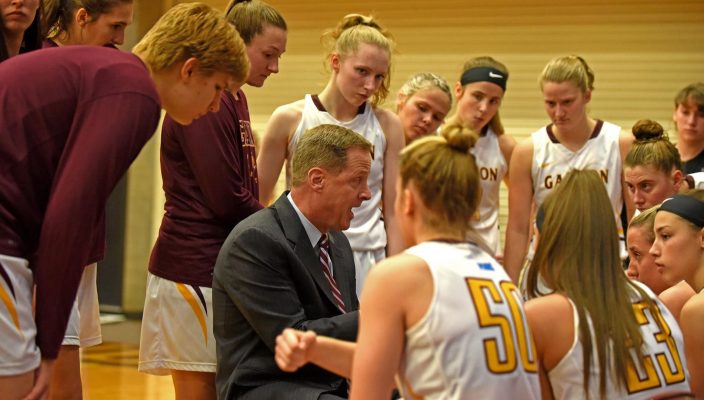 Dominating the competition women’s basketball at 5-2

The Gannon University women’s basketball team saw its four-game winning streak snapped by Bowie State University Saturday, 58-46, in a nonconference game at Bowie, Md.
The loss dropped Gannon’s overall record to 5-2 going into Saturday’s Pennsylvania State Athletic Conference game at Kutztown. The Knights are 2-0 so far in PSAC play.
Despite the most recent loss, Gannon swept the PSAC Weekly Awards for the second time this season, which began on Nov. 7.
Tori Obenrader and Haley Tewes both collected their second honors of the season.
Obenrader, a sophomore, was chosen as PSAC West Athlete of the Week after her second double-double of the season and fifth career double-double.
She scored a team-high 20 points and grabbed 13 rebounds in the loss to Bowie State.
Tewes, a senior forward, was named Defensive Athlete of the Week.
Tewes grabbed eight rebounds, recorded two steals and a block, and added two points and three assists to her defensive stats.
No one else scored in double figures for the Knights. Boston McKinney added eight points, including a pair of 3-pointers, and she also tallied three assists and two steals. Emily Poling contributed seven points for Gannon, which shot a season-low 29% from the floor.
Despite the Knights’ shooting woes, they trailed by just four points at halftime, 22-18. The third quarter saw two lead changes and two ties. Obenrader and McKinney would later hit back-to-back 3-pointers to tie the game 29-29 with just under five minutes to play in the quarter.
Bowie State pulled away a bit at the start of the fourth quarter, but Gannon was within five points, 48-43, with possession with a little over three minutes remaining. But a turnover sparked a 5-0 Bowie State run, and Gannon never got closer than seven points the rest of the way.
Chelsea Rourke finished with six points bringing her closer to 1,000 career points. Rourke only needs nine more to reach the career milestone.
Prior to the loss to Bowie State, the Knights opened PSAC play the previous weekend and came away with a pair of wins at the Hammermill Center – 80-73 over West Chester on Nov. 23 and 87-69 over Millersville the following afternoon.
Gannon showed excellent balance and red-hot shooting in the win over West Chester, as five players scored in double figures, led by Obenrader’s 14. Rourke added 13 while Tewes scored 12 and McKinney and Poling each added 10.
Gannon shot 62% from the floor for the game, including 74% in the first half.
The Knights continued their hot shooting the following day, finishing at 59% for the game in the win over Millersville.
Obenrader once again led the way offensively with 18 points, but she had plenty of help for the second straight game as five players wound up scoring in double figures.
Poling scored 14 points on an efficient 4-for-5 shooting effort from the floor. Sydney Mitchell added 12 points, Rourke contributed 11 and Tewes chipped in with 10.