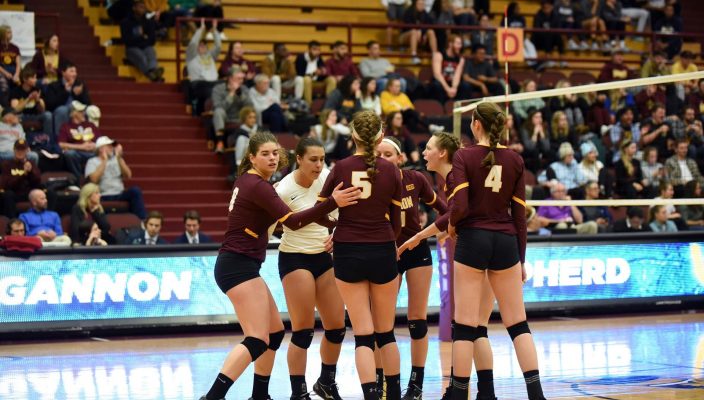 The Gannon University women’s volleyball team had a bittersweet Thanksgiving break after falling to Shepherd 3-0 in the semifinals of the Pennsylvania State Athletic Conference Tournament on Nov. 22.
But the break proved more sweet than bitter when the Knights learned they were named the second seed in the Atlantic Region for the 2019 NCAA Division II Tournament.
Gannon will open regional play at 2:30 p.m. Thursday against No. 7 seed Seton Hill at Wheeling University in Wheeling, W. Va.
Three other first-round games will find No. 3 East Stroudsburg meeting No. 6 Shepherd, No. 4 Shippensburg taking on No. 5 Millersville and No. 8 Fayetteville State battling top seed Wheeling.
Should the Knights beat the Griffins, they would take on the winner of the East Stroudsburg-Shepherd match at 5 p.m. Friday. The two semifinal winners would meet in the region championship match at 5 p.m. Saturday.
This will mark the Knights’ 11th straight NCAA Tournament appearance and 17th in program history. Last season, Gannon won its regional tournament opener by topping seventh-seeded Shepherd, 3-0, before falling to third-seeded Seton Hill, 3-2.
Eight eight-team regionals will be played at on-campus sites. The winners of each of the eight regionals will advance to the finals, Dec. 12-14, at the Auria Event Center in Denver.
Metropolitan State University of Denver will serve as the host. Competition at the finals site will be single-elimination, best three-of-five-set matches.
Gannon saw its bid for a PSAC Tournament title short-circuited by Shepherd, 25-20, 25-22, 25-23, at the Hammermill Center, dropping the Knights’ overall record to 27-6 on the season.
Gannon entered the semifinal match on a 12-game winning streak; the last team to have beaten the Knights entering that match was Shepherd, which edged Gannon, 3-2, on Oct. 17.
Shepherd used a fast start to jump out to a 9-3 lead in the first frame of the Nov. 22 match. Gannon answered with five straight points to pull within one, 9-8, after Lauren Sampson connected on a momentum-swinging kill.
The Rams responded to build an eight-point lead, 24-16, after a 4-0 run and went on to win the opening frame, 25-20.
The Rams once again established an early 17-9 lead in the second set. The Knights then began to push back with a crucial 9-0 run to steal the lead, 18-17, following a Sampson kill.
Shepherd went on a 5-2 run of its own to regain the lead, 22-20, and held off the Knights for the 25-22 second-set win.
The third and final set saw a match-high seven lead changes after Gannon opened up a 13-7 lead. Shepherd came storming back to lock the set, 18-18, and then rattled off three straight points to win the frame, 25-23, and the match, 3-0.
Sampson led the Knights with 13 kills while Ally Smith contributed 10 and Maggie Greenfield nine. Ashley Beyers collected 38 assists in the loss.
Gannon coach Matt Darling said his team simply didn’t play well enough to win.
“Our offense was very bad tonight,” he said in an interview with the Erie Times-News after the match. “We had too many unforced errors, and they had almost no unforced errors.
“They were cleaner; they were better.”
Thursday will mark the second time meeting of the season between Gannon and Seton Hill.
The Knights won the previous match, 3-0, at the Hammermill Center on Nov. 2, and from that point on, Seton Hill won six straight matches before losing to East Stroudsburg, 3-1, in the opening round of the PSAC Tournament on Nov. 19.
The Griffins will bring an overall record of 19-10 into the match.