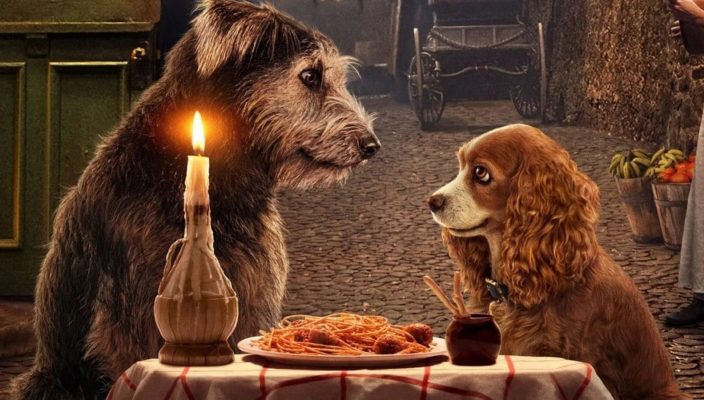 ‘Lady and the Tramp’ restores faith in live-action remakes

Given Disney’s live-action remake kick, I did not have high hopes for its remake of “Lady and the Tramp.” Especially given what I witnessed befall “The Lion King,” another beloved anthropomorphized Disney musical movie.
More to feed into my skepticism is that “Lady and the Tramp” was not released as a traditional blockbuster but through Disney’s new streaming service, “Disney Plus,” on Nov. 12th.
Therefore, this was the first Disney remake not to have a theatrical debut in theaters. However, the film features exceptional voice acting.
Specifically, I cannot give enough praise for Sam Elliot as “Trusty,” the friendly ol’ neighborhood bloodhound. This was the best casting decision ever. Direction of the film is fresh and more befitting a 2019 audience, and if you are open to some change it does not lack heart.
Around Christmas time in 1909, New Orleans “Darling” (Keirsey Clemons) receives a female cocker spaniel puppy as a present from her husband Jim Dear (Thomas Mann).
I just now as an adult 18 years later realized that this would make her name Darling Dear and that adorably baffles me. These are the human owners of our main protagonist, Lady (Tessa Thompson). Humans play a more integrated role in this feature than its predecessor.
Lady is one pampered pooch who is doted on by her owners and befriended by the neighbor’s dogs on either side of the Dear residence. Trusty the Bloodhound is voiced by Sam Elliot, and Jacqueline, a Scottish terrier, is voiced by Ashley Jensen. In the latter movie, Jacqueline was Jock, just a minor gender swap for the newer film. Life was good and predictable for every dog.
An independently-minded schnauzer-mutt street dog named Tramp, voiced by Justin Theroux, winds up in Lady’s backyard after he bolted the scene of heroic shenanigans to help fellow street dogs.
Simultaneously, Lady’s owners are being more distant toward her than normal, and she can’t fathom why. Upon encountering this strange new dog, Lady barks trying to alert her owners of the intrusion.
To keep Lady from ratting him out, Tramp warns Lady that her owners are having a baby. This sufficiently deters Lady as Tramp continues to say, “When a baby moves in the dog moves out.” Trusty and Jacqueline show up to shoo Tramp off.
Sure enough, Jim and Darling give birth to a little girl, Lulu. Thus, the movie deviates from the original gender of a baby boy but this is mute in terms of storyline significance. As a result, Lady gets ignored; even when she intends to warn her owners of a vicious rat she is put outside. What Tramp said echoes through her mind and spreads doubt about her place in the family.
Unfortunately, when her owners go on vacation with their baby they leave Lady under the care of Aunt Sarah (Yvette Nicole Brown), who not only hates dogs but was already bitter because she wanted to watch Lulu. Of course, she brings along her two identical cats Devon (Nate Wonder) and Rex (Roman GianArthur). Unlike in the animated film they are not Siamese twin cats, overall an improvement and less problematic given their musical number.
Devon and Rex cause a ruckus that leads to a series of events where Lady is blamed, un-collared (this is a big deal in the movie), muzzled and out on the streets. By happenstance Lady and Tramp encounter each other under these circumstances and his street smarts are used to solve an impending problem of Lady’s safety as well as remove the muzzle.
Lady and the Tramp spend the day together as we watch the doggie romance unfold. Inserting a new element of depth, Tramp gets a back story, one that explains his cynicism as well as allows him to empathize with Lady. Elliot (Adrian Martinez), a dog catcher, gets a hold of Lady. In the pound Lady meets other street dogs who give a dramatic musical number about why Tramp is called “the Tramp.”
From this point on is where the storyline changes more but still ends with happy feelings and stressing the importance of family and acceptance. Also, to make this movie even cuter, they adopted real dogs that needed homes for various reasons to play Lady and Tramp in the movie.
Those two dogs are now loved and owned by the dog trainers who worked with them on set.
Compared to the original animated film released in 1955, the main plot of the live-action remake remains relatively the same, despite a multitude of “minor” detail changes. In order not to divulge too much information I will not get into all these minor changes, but my list exceeds 20.
Is change or are the changes in the movie bad? Ultimately, that is for you to decide. If you have Disney Plus or a generous friend and a spare hour and 44 minutes, there is no reason not to.
It breathed new life into an old classic and brought back old feelings with a different dimension to them.