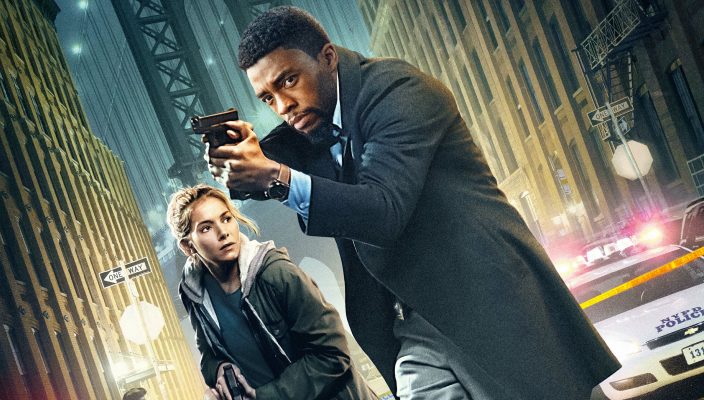 ‘21 Bridges’ sheds new light on being a cop

Sometimes, a movie trailer comes along that takes on a life of its own and becomes its own self-contained piece of fiction to be enjoyed by everyone who sees it.
Recently, Chadwick Boseman’s latest film, “21 Bridges,” did just that.
With a gripping pace, a powerful backing music track and a couple one liners thrown in for good measure, “21 Bridges” promised to be a thrilling ride from beginning to end.
Whether it truly lived up to this promise can be up for debate, but one thing is for certain: Boseman knocked this one out of the park.
“21 Bridges” follows Detective Andre Davis (Boseman), a New York City native whose father died at the hands of three criminals when he was a small child. Since then, Davis has worked to cleanse the streets of New York and has racked up a reputation as a trigger-happy cop in the process.
When two armed robbers inadvertently kill eight police officers during their getaway, a massive conspiracy involving many cops on the force is uncovered.
When the FBI gets involved in the manhunt, they give Davis an ultimatum: catch the cop killers by morning. To achieve this, Davis closes off all of Manhattan.
In very quick succession, all three rivers, all eight tunnels and all 21 bridges that provide the means of transportation in and out of the city are closed off.
While “21 Bridges” is a relatively simple movie at its core, it is thoroughly entertaining, and even gets a few current and important messages across during its runtime.
As previously noted, Boseman brings his signature charm and genuine acting ability to the role of Detective Davis, and he really is the highpoint of the movie.
That’s a pretty good thing considering he’s the leading man. I am a big fan of his work in “Black Panther” and “42,” and I’m glad to see him continue to get a variety of roles in Hollywood. As long as he’s in a movie, I can almost guarantee that my butt will be in a seat.
J.K. Simmons also does a commendable job throughout the film.
I’ve been a fan of his since I was a kid after seeing him in the original “Spider-Man,” and he hasn’t disappointed me since.
I cannot express how refreshing it is to see a movie made in this modern age that portrays police officers as people, and that is something that “21 Bridges” does 10 times over.
You would be hard-pressed to call “21 Bridges” polarizing in any way. While we do spend the majority of the movie with Boseman’s character and we see things from his perspective, he is only one side of the coin.
Playing opposite Boseman is tough but fair portrayal of a police officer is Simmons’ character, Captain McKenna, who plays the system like a fiddle to move drugs through the city under the guise of being a benevolent protector.
Men under his command are shown planting a gun on a man they shot on sight, only to be caught by Davis.
By showing both sides of this story, “21 Bridges” paints a sympathetic portrait of what it means to be a police officer today without glossing over the fact that there are bad cops out there.
Lately, there aren’t too many movies that made me rewatch the trailer over and over. I’ve found that more often than not, this leads me to get my hopes up too high, and the anticipation for the movie to come out ends up being better than the movie itself.
This kind of happened for me with “21 Bridges,” but not in the usual way. The trailers I watched led me to believe that this was going to be a pretty straightforward cat-and-mouse type of movie, but around the halfway mark, it takes a sharp turn and becomes almost a mystery.
Normally, this leaves me feeling cheated in some way, like I was duped into seeing a movie that I didn’t pay for, but for some reason, this isn’t the case with “21 Bridges.”
Maybe it’s the fact that I think Boseman is a terrific actor and I love everything he’s in, or it could be the fact that I was engrossed enough in the story by the time it flip flops that I didn’t care.
Either way, “21 Bridges” is a very competent and entertaining cop thriller that I’d be happy to watch again.

« Return to ‘Zombieland’ before it leaves theaters Coming to terms that end is near; the final countdown is here »