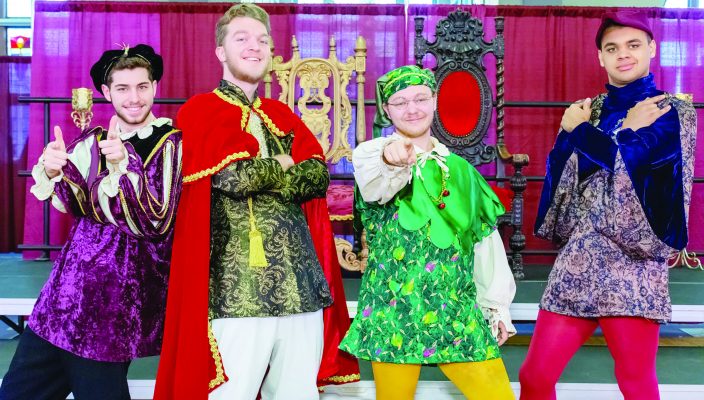 This weekend, Schuster Theatre will be reprising last year’s highly successful Christmas dinner show.
Yehl Ballroom will be transformed into a medieval banquet hall with a scrumptious feast and lively entertainment.
Guests will dine on holiday roast beef, a mixed vegetable medley and potatoes alongside salad and rolls. Legal libation will be offered for guests of drinking age and mulled cider, water, coffee and tea will flow freely for all in attendance.
Written and directed by the Rev. Shawn Clerkin, the interactive show will feature beloved characters from last year’s performance, all played by the same student actors.
Petra Shearer, a junior English and theater performance major, will be reprising her role as Lady Rose.
“It’s beautiful to come back together as a cast to continue developing this show,” Shearer said. “We already know each other very well, so it’s easy to create chemistry.”
The setting will once again be the majestic court of Cheltham Hall, where Lord Harold and Lady Rose, along with a colorful cast of cohorts, will be reunited for another holiday extravaganza.
This time around, their daughter Mary is preparing her audition for Lord Gannon’s Academy of Dramatic Arts.
Mary’s family and friends, including Harry, Sloops, Beatrice, Rodney Jangles and a German dominatrix named Wilma Hoffstadt, are all rallying to help build up her resume.
Luckily, Rodney has penned an entire show, “Gabriel’s Message: An Angel’s Work is Never Done,” to help Mary prepare for the audition.
The show-within-a-show follows the challenges the archangel faced in helping Mary and Joseph cope with the sudden news of pregnancy.
Rodney’s magnum opus takes a lighthearted approach to Gabriel’s work, with plenty of tongue-in-cheek humor and beloved Christmas carols. Alongside the laughs, the entire show offers a heartwarming message that is sure to leave guests in cheery spirits.
Brevin Flowers, a junior mathematics major, will be playing Harry, son of Lord Harold and Lady Rose. He has enjoyed being part of the character’s evolution.
“Those who saw the show last year know Harry isn’t the sharpest guillotine in the shed, but he has a good heart,” Flowers said.
“Over the past year, Harry has gone away to school and seen a bit more of the world. He’s still quite energetic, but more mature, more worldy and just a tiny bit more cynical.”
Flowers particularly relishes getting to interact with guests while in character.
“It’s not something the theater department here does often, so it’s a very unique experience,” Flowers said.
Sophomore physician assistant major Brady Bizon will be playing alongisde Flowers as Sloops, the uptight butler of Cheltam Hall.
“We are changing the layout of the tables this year so there will be a more distinct stage area, but still be plenty of audience interaction,” Bizon said.
Bizon’s favorite number in the show is a song performed by the men called “My Heart is in the Highlands.”
He is confident that guests will enjoy watching the comedic story and hearing their favorite Christmas carols sung in four-part harmony.
Performances will be at 8 p.m. Thursday and Friday and at 2 p.m. Sunday.
Reservations were capped Tuesday at noon to facilitate the food order. No tickets will be sold at the door.
ALEX STAUFF
conantst001@gannon.edu