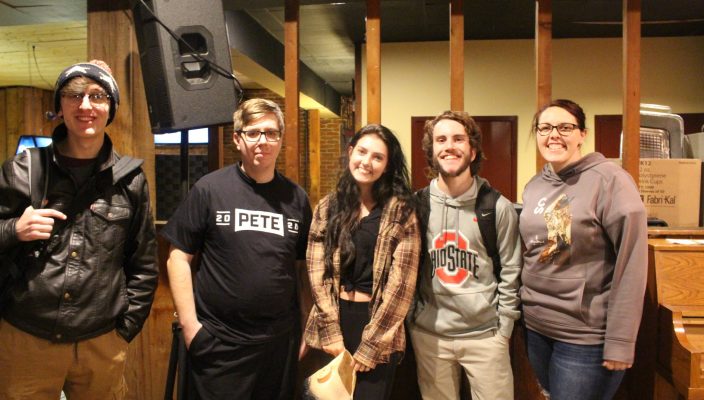 Students gathered at The Knight Club on Nov. 21 to participate in the monthly Politics & Pints, with the topic revolving around impeachment.
The impeachment inquiry of President Donald Trump has started a fierce debate among students at Gannon.
Jeff Bloodworth, Ph.D., history program director, co-hosted the event with Peter Agresti, who holds a doctorate in law and serves as program director for legal studies.
Bloodworth said that students had a “civil” discussion on the topic.
“We offered background on what led to impeachment,” Bloodworth said.
“One thing we noticed was that students did say that pro-Trump students felt muffled, they feel they cannot express their opinions on the matter, and so many of them make it a no-go conversation topic between them and their roommates to avoid heated fights.”
Students in attendance felt the event was beneficial in learning more, and even offered up their own opinions on the matter.
Matt Whaley, a freshman history and political science double major, said the event was civil and educational.
“It was very eye-opening, because with there being close to 30 people, we had many different viewpoints presented,” Whaley said.
“While we all didn’t agree on everything each of us was saying, we were respectful, and I think learned a lot from each other, the complete opposite from what you see on TV.”
Addison Price, a freshman public service & global affair major, said she felt the event helped her become more informed and in a positive environment.
“I have not been able to keep up with the news since I’ve been busy, but Politics & Pints really helped me become better informed,” Price said.
“We mostly talked about whether we agreed with the impeachment and why. Most students agreed that there was a reason for the impeachment hearings, and we also discussed whether the president would actually be impeached; most of us said no.”
Andrew Applebee, a freshman history major, felt the discussion went smooth and properly addressed the topic of impeachment.
“I think the discussion went very well,” Applebee said. “Aside from my personal views on the issue, it was important to hear the perspectives of others, and it was good that we all agreed that this is a relevant matter in our country.”
On Oct. 31, the U.S. House of Representatives voted to formally authorize the impeachment inquiry into the nation’s 45th president and it has resulted in an ongoing conversation about whether the president should be impeached, and whether a trial should be held in the U.S. Senate.
Trump is being investigated after a whistleblower came forward alleging that Trump threatened to withhold military aid and a White House visit from Ukrainian President Volodymyr Zelensky in exchange for having the Ukrainian government investigate former Vice President Joe Biden’s son Hunter for business dealings he had conducted in the country.
While no articles of impeachment have been drafted at the time this story was written, several House committees have been holding hearings with witnesses claiming they were aware of the so-called “quid pro quo” that occurred.
While it is believed the House Judiciary Committee will send articles of impeachment to the full House, and that Trump will be impeached, the U.S. Senate is expected to vote to acquit the president based along party lines.