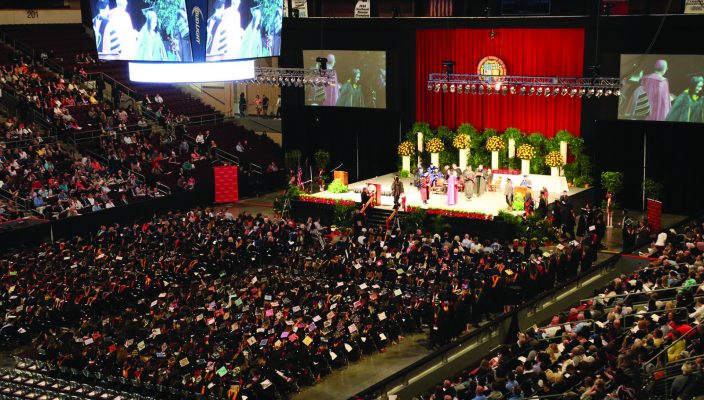 The renovations for Gannon University’s Mary, Seat of Wisdom Chapel are closer to completion, as the goal remains to have the project finished by the end of the spring semester.
The design for the chapel will hopefully be approved by the end of the month, when there will be a meeting with the Rev. Lawrence Persico, bishop of the Erie Catholic Diocese.
The Rev. Michael Kesicki, associate vice president for Gannon’s Mission and Ministry, said the design is almost done.
A team has been put together consisting of representatives from various departments including marketing and communications, finance and maintenance to work on the design. The team has also been meeting with an architect to discuss these plans.
They have also been asking faculty and students what their thoughts on the new design are, looking to make it more meaningful as a place not only for Mass but also to pray.
Not much will change within the chapel, Kesicki said. The main entrance will still be on Peach Street, and the sanctuary will still be on the opposite side of the building.
Going through the steps will help bring the team working on the project closer to their goal.
Some students, like senior Allison Perston, said she’s a little sad about losing the chapel, especially since it’s the last year that she will be on campus.
“I think some seniors, myself included, were a little disheartened to hear about the original chapel being out of commission, especially with the new one probably not being completed till after we graduate,” she said. It was students like these that helped form Kesicki’s goal for the chapel.
“My personal goal is for some of the seniors to have Mass before they graduate,” he said.
As the design plans are being finalized, plans for financing the chapel are also being produced and finalized.
Ultimately, the chapel will be funded through donations collected from alumni, faculty, students and anyone interested in supporting the chapel, Almitra Clerkin, associate vice president of University Advancement, said.
“Mary, Seat of Wisdom Chapel holds a special place in the hearts of alumni, friends, students, faculty and staff,” Clerkin said. “Gannon Advancement is working on securing gifts of all sizes for the refurbishing of a chapel that is integral to the spirit of our university.”
There has already been some progress with this as campus fraternity Delta Sigma Phi has already expressed interest in assisting the chapel with its renovations. The main campaign for raising money, though, will begin after Christmas and continue after the spring semester ends, into June.
The brothers of Delta Sigma Phi became involved based on previous involvement with the chapel in 1989, Anthony DiPasqua, the Leadership Giving officer, said. When the chapel was first being constructed, the brothers donated the stained glass windows, which are to remain through the renovation.
“We’re currently working with the chapter, Father Kesicki and the project committee to identify ways for the chapter to assist in the renovation,” DiPasqua said.