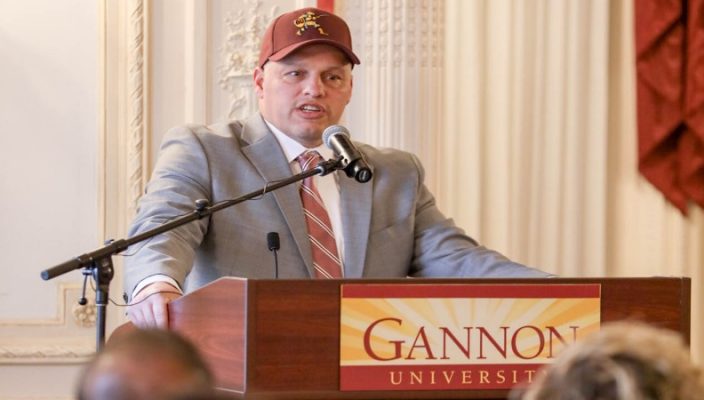 What a difference a year makes.
It was just about a year ago at this time that Erik Raeburn learned he’d been relieved of his duties as head football coach after three seasons at Division I Savannah State University in Georgia.
On Tuesday, Raeburn’s career took a different turn as he was named the new head coach at Gannon University.
Raeburn replaces Brad Rzyczycki, who stepped down Sunday, a day after the Knights finished the 2019 season with a 28-27 nail-biter loss at Lock Haven.
Raeburn served as the offensive coordinator and quarterbacks coach under Rzyczycki during the recently completed 2-9 campaign.
Prior to that, Raeburn compiled an 8-23 record during his three seasons at Savannah State, with six losses coming to FBS schools. Savannah State played at the FCS level at the time but has since dropped down to Division II.
This will mark Raeburn’s fourth head coaching job. A graduate of Mount Union, he started his coaching career there as an assistant, serving as offensive coordinator and offensive line coach in the late 1990s when the school won three straight Division III national titles.
Raeburn’s first head coaching job came in 2000 at Division III Coe College, where his teams compiled a 57-26 record in eight seasons. He moved to Wabash, another Division III school, in 2008 and guided the Little Giants to a 78-13 record over eight seasons before taking the Savannah State job in 2016.
Raeburn thanked the Gannon administration for the opportunity to coach and also thanked Rzyczycki for welcoming him to the program as an assistant this year.
“This will be my fourth head coaching job, and I’m as excited as I was when I got my first head coaching job back in 2000,” he said at his introductory press conference Tuesday in Old Main.
Raeburn said he thoroughly enjoyed his playing career at Mount Union and as a coach he’s always wanted his players to have the same experience he had. That experience, he said, boiled down to three things.
“The first was that it instilled a great work ethic,” he said.  “Our coaches encouraging us and pushing us, helping us to realize how much we were actually capable of made a huge impact in my life.
“The second was self-confidence. It was a huge boost to my confidence. The third thing was that there was a sense of family in our program.”
Lisa Goddard McGuirk, Gannon’s athletics director, said Raeburn is committed “to both academic and athletic excellence.
Moreover, he is committed to fostering a positive and transformative experience for our student-athletes.
“With Erik’s extensive experience, combined with his knowledge of our program and the Pennsylvania State Athletic Conference, he has the ability to begin building for success immediately.”
Rzyczycki held the title of head coach for eight years and has been on the coaching staff longer.
He said in a statement released Sunday that he is excited to continue serving the university in an administrative role, but the specifics of that role were not spelled out.
“I would like to thank Gannon University for having me as the head football coach over the last eight years,” Rzyczycki said.
His eight seasons as head coach match the second-longest tenure of a Gannon football head coach with Bill Elias.
Rzyczycki led the team to a 9-2 overall record in his third season in 2014 and brought the school its only Pennsylvania State Athletic Conference title that same year.
Rzyczycki’s 38 wins are the second-most of any Gannon coach, and he has averaged the most wins per year in his time coaching.
Following the Knights’ 9-2 record in 2014, they went 6-5 the next year for their third straight winning season – the longest stretch of success since the program notched four straight winning seasons from 1992-95.
Rzyczycki’s final game at the helm was a back-and-forth thriller Saturday.
Gannon was down seven points with four minutes left in the game and marched 75 yards in 13 plays to score on Joey Cox’s 1-yard touchdown run.
Instead of attempting to tie with a kick the Knights attempted a two-point conversion that was knocked down on the last play of the game.
Cox, Gannon’s leading receiver, started his first game at quarterback and passed for 149 yards and a touchdown.
He also added 75 yards and three touchdowns on the ground.
Cox ended his Knights career in the top 10 for receptions and receiving yards.
Fellow senior Zevin Holley had his third straight career-best rushing game, finishing with 164 yards on 33 carries.
Khwan Mickens and Malachi Woody each recovered fumbles to push Gannon’s forced turnover streak to 12 games, encompassing the 2019 season and part of the 2018 season.
Jeremiah Brennin finished with nine tackles.