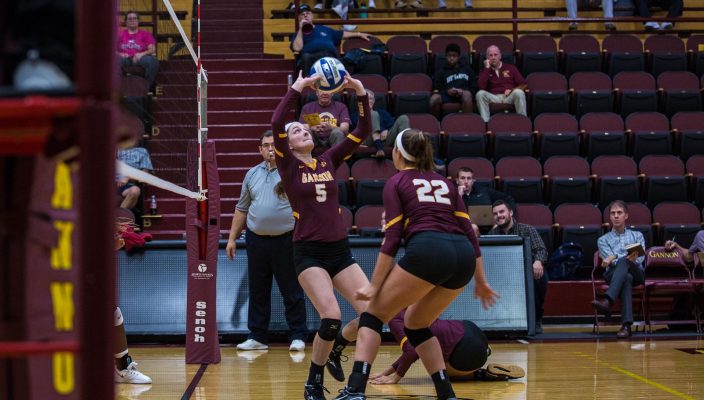 The Gannon University women’s volleyball team opened play in the Pennsylvania State Athletic Conference Tournament Tuesday night by defeating Edinboro, 22-25, 25-19, 25-13, 25-11, at the Hammermill Center.
The victory improved the Knights’ overall record on the season to 27-5 and stretched their winning streak to 12 games. However, they had their consecutive set streak snapped at 33, which was the second-longest in Division II entering play Tuesday night.
With the win, top-seeded Gannon also earned the right to host the PSAC Tournament final four for the fourth straight season.
The Knights will take on Shepherd at 7:30 p.m. Friday in the Hammermill Center in one semifinal game. Shepherd, which defeated Millersville, 25-15, 21-25, 25-23, 25-20, Tuesday night in another quarterfinal match, is the last team to have beaten Gannon. That occurred on Oct. 17 at Shepherd in a 25-19, 18-25, 15-25, 25-12, 15-12 battle.
Saturday’s championship game also will take place at the Hammermill Center at 7 p.m.
Ally Smith registered 25 kills while Lauren Sampson added 16 and Ashley McClung contributed 10 to power the Knights past Edinboro Tuesday. Ashley Beyers totaled 56 assists.
Gannon coach Matt Darling said he wasn’t sorry to see the set streak end Tuesday night.
“I’m glad it’s out of the way,” he said. “I told them at some point in the playoffs you’re going to lose a set and you have to be ready to bounce back from that. They responded really well to it – they didn’t lose their heads.”
Darling said he wasn’t alarmed at dropping the first set because he thought his team was playing well. “We had a lot of offense,” he said. “We scored 19 points on kills alone, so we were getting points but we gave away a few too many.
“We wanted to maintain our level of play and we thought if we kept the pressure on they eventually would crack a little, and that would give us our opportunity.”
Prior to Tuesday night’s PSAC Tournament opener, Gannon capped off a strong regular season by sweeping Edinboro, 25-23, 26-24, 25-21, and Clarion, 25-14, 25-23, 25-16, on the road last week.
Against Edinboro on Thursday, Gannon trailed 5-2 early but battled back to lock the contest, 5-5. Edinboro responded to build a four-point edge, 15-11, and force a Gannon timeout.
Gannon then fought back to tie the set, 18-18, following a big Ashley Kerestes kill. The Knights used a 7-5 run to close the set and pick up the win, 25-23.
The teams traded points in the second set, which saw a match-high 15 tie scores and three lead changes. The Fighting Scots were able to build a 23-20 edge late in the set. The Knights responded with four straight points to regain the lead, 24-23, after a Lauren Sampson service ace. Gannon went on to win the set, 26-24.
The teams picked up where they left off to find themselves locked at 14-14 in the third set. The Knights then began to take control with a 4-0 run fueled by three Sampson kills to make the score 18-14. Gannon didn’t look back and went on take the set, 25-21.
Sampson finished with 18 kills while Smith added 15. Beyers contributed 41 assists and three blocks.
The Knights had less trouble with the Golden Eagles of Clarion on Saturday, winning the first and third sets by 11 and nine points, respectively.
The Knights started with three straight kills to open the match and take an 8-3 lead. Clarion was able to close the gap to 11-8 before Gannon went on a six-point run to win the set, 25-14.