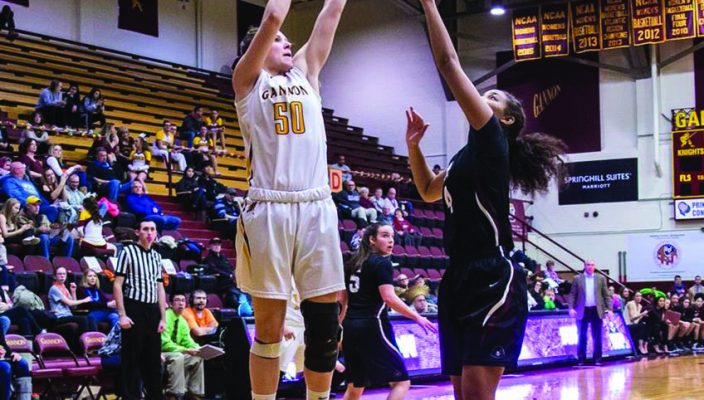 Gannon University’s women’s basketball team filled up the basket this past week, scoring more than 90 points in two consecutive games for the first time since the 2013-14 season.
The Knights needed every point they could get in their 93-89 home win over Fairmont State on Nov. 13, but they had an easier time of it in a 92-70 road victory over Lake Erie College Sunday in Painesville, Ohio.
Gannon improved to 3-1 overall going into their Pennsylvania State Athletic Conference opener at 1 p.m. Saturday against West Chester at the Hammermill Center.
Tori Obenrader, coming off her impressive 2018-2019 season in which she was named PSAC West freshman of the year, scored a combined 51 points in the two wins. These 51 points included a 36-point night against Fairmont State. Obenrader also recorded 12 rebounds to go along with her 36 points against the Falcons.
Gannon fell victim to hot shooting early on in the contest, as the Falcons made six 3-pointers in the first quarter.
However, the Knights used a 14-2 run late in the second quarter, including a deep 3-pointer as time expired in the half from Boston McKinney, to scratch their way to within two going into intermission.
Gannon took its first lead of the game at the 7:21 mark of the third quarter and the game then saw seven more lead changes from that point on. After Fairmont State tied the game at 86-86 with just under a minute left, Obenrader and Sydney Mitchell nailed free throws to secure the win for Gannon.
In addition to Obenrader’s 36 points, Chelsea Rourke and McKinney each scored 12 while Haley Tewes chipped in 10 points to go with six steals. McKinney finished with eight assists for Gannon, which shot 49% from the floor and 35% from 3-point range while connecting on 21 of 25 free-throw attempts.
The Knights continued their scoring outburst Sunday against Lake Erie, a game that saw four players for Gannon score in double figures. Obenrader and Rourke each scored 15, while Emily Poling and Tewes each tallied 12 points. Tewes also contributed a team-high seven rebounds.
Gannon shot 44% from beyond the arc, including 50% from Rourke, who made four 3-pointers. Obenrader had an efficient 7-for-9 shooting effort and has scored in double figures every game this season.
The Storm saw their only lead of the game early on in the contest, and they saw it disappear not long after. Lauren Flannery, who scored a game-high 23 points, connected on a free throw for the game’s first point, but the Knights rallied with a 6-0 run after that and didn’t look back.
Gannon used a high-scoring third quarter of 30 points to take a 19-point lead into the fourth quarter and coasted to the win.
Obenrader scored nine of the Knights’ 30 points in the quarter while Mitchell added eight.
Following Saturday’s matchup with West Chester, the Knights will return to the Hammermill Center the following day to host Millersville at 1 p.m.