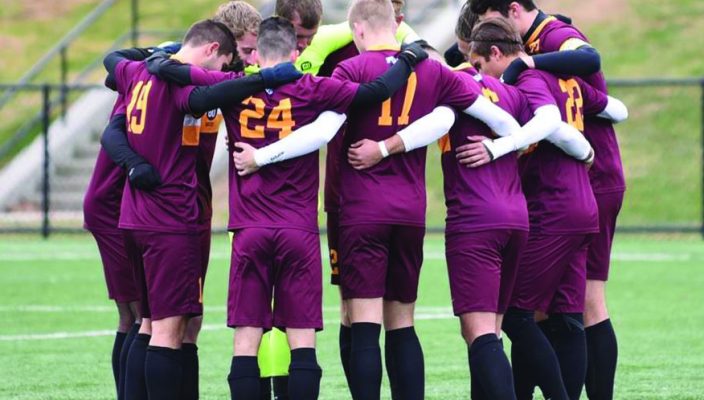 The Gannon University men’s soccer team came up short in its bid to take home a Pennsylvania State Athletic Conference Tournament championship last week, but the Knights’ season is far from over.
Despite losing to Millersville in the PSAC Tournament finals, 1-0, Sunday, fifth-ranked Gannon was selected to host the NCAA Division II Super Region 1 tournament this weekend at McConnell Family Stadium.
The Knights, who enter tournament play with a 17-2 record, earned a first-round bye and will play the winner of Friday’s West Chester-Assumption match Sunday at McConnell Family Stadium.
Gannon coach Billy Colton said he’s excited that his team was selected to receive an at-large bid to the regional tournament.
“Being the No. 2 team in the region, it shows how good we’ve been this season,” he said. “This is the first time that Gannon has made the tournament since 2012, so it will be the first time for any of these players to experience that. This is the time of year that you want to be playing.”
This marks the 10th time Gannon has advanced to the NCAA tournament; three times the Knights have gone as far as the semifinals. This year’s national semifinals and championship will be played Dec. 12 and 14 at Highmark Stadium in Pittsburgh.
Junior forward Alex Lee Yaw said he’s looking forward to this weekend’s match at home.
“We’re excited to be in this tournament,” he said after the team got word of its tournament selection Monday evening. “I’m a junior this year, and this is the first time I’ve gotten to the tournament. After how we’ve done this season, I think we’re in a good position, and we’re excited to see what we can do.”
Gannon entered last weekend’s PSAC Tournament on a 10-game winning streak, and the Knights made it 11 with a 2-1 overtime decision over West Chester.
That put the Knights in Sunday’s tournament final against Millersville. A slow start for both teams saw both defenses stand up tall to the attacks from their opponents.
After a scoreless first half, the Marauders found their opening goal 33 seconds into the second half, which rattled the Knights.
Gannon never fully recovered as Millersville kept getting close to a second but incredible saves from Chandler Halwood kept the Knights in the match.
Gannon came close to scoring many times, including a shot on an open net for Sergio Del Castillo that went over the bar in the 80th minute. That would have equalized the match.
In Friday’s semifinal win, Colin Muller put West Chester ahead right before halftime after the two teams had battled evenly through the first half.
Halwood was kept busy during the entire second half, saving potential goals time and time again.
The Knights kept putting balls into the box and trying to score until one defensive clearance from West Chester found the left foot of Castillo, who ripped a shot into the upper left corner from distance that tied the game up 1-1 with four minutes remaining.
The Gannon back line proved to be too much for West Chester and they denied two clear chances for the Golden Rams to break Gannon’s heart.
Joe Knox came on in the 79th minute of play to provide fresh legs for Gannon, and a little over six minutes into overtime he sent a defender the wrong way as he dribbled toward the goal and delivered the game-winning shot from the edge of the box to send the Knights to the championship game.
This was the sixth comeback performance from the Knights this season, and the win gave the team its most wins at 17 since the 1989 team that went 18-3-1 and reached the semifinals of the NCAA tournament.