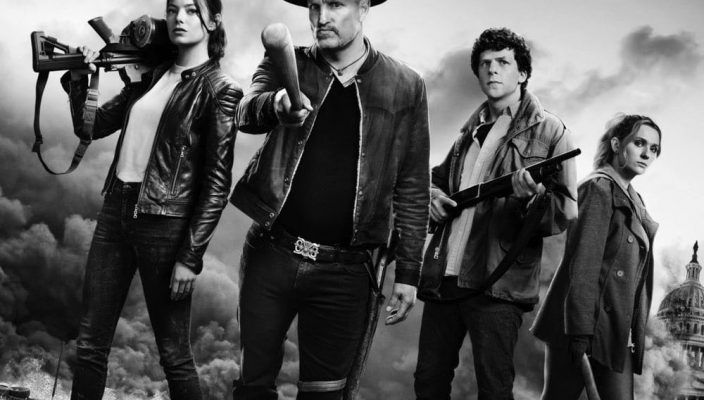 Return to ‘Zombieland’ before it leaves theaters

I feel like I have to get something off my chest before I talk about this movie. I’ve only just watched the original “Zombieland” for the first time this month.
I know, here I am pontificating about how much I like movies and am a movie buff, and I waited this long to watch something so highly acclaimed as “Zombieland.”
With that out of the way, I loved the first one and as soon as I finished it I couldn’t wait to see “Zombieland: Double Tap.”
“Double Tap” follows the characters that we met in the first movie, Columbus (Jesse Eisenberg), Tallahassee (Woody Harrelson), Wichita (Emma Stone) and Little Rock (Abigail Breslin) 10 years after the events of the first movie.
Tensions start rising in the White House, where the group has taken up residence when Columbus and Wichita start having relationship problems.
Tallahassee and Little Rock are at odds as well when Tallahassee can’t stop treating Little Rock like a child and let her grow up. All this comes to a head when Wichita and Little Rock take off in the dead of night, leaving the guys to fend for themselves.
Just when Columbus thinks he’s getting over Wichita, she comes back and says that Little Rock took off with a boy they met on the road.
The gang gets back together to get Little Rock back and make sure she’s safe.
“Double Tap” is similar in structure to its predecessor, being that it is a road trip movie at heart.
Granted, this road trip is full of zombie death and takes place in the post-apocalypse, but it’s a road trip nonetheless.
I happen to love these kinds of movies way more than I should.
As I’ve written about before, I love road trips, and any kind of movie that emulates that experience for me without having to spend money on a tank of gas is a winner in my book.
The action of “Double Tap” is just as good as the first one. Zombie deaths are just as satisfying, and the group finds new and improved ways of dealing with the brain eaters that keeps the audience on its toes.
All that being said, nothing is ever going to beat the scene from the first movie when Tallahassee sets up multiple pistol clips for easy reloading as he shot wave upon wave of zombies from the shelter of a hot dog stand.
Few action scenes will ever live up to that, but I digress.
The blend of action and comedy that director Ruben Fleischer introduced in the first film has been perfected here.
There were multiple times over the course of the movie that the entire theater was laughing hysterically, and with good reason.
While they were few and far between, there were multiple references to the first movie that eagle-eyed fans of the original can enjoy without alienating newer audiences.
While I’m new to the franchise, I can tell by talking to people that even long time fans of the first one were impressed with “Double Tap.”
I can guarantee that if you are a fan of the 2009 classic you are going to get a kick out of this movie. This isn’t for everyone, though.
There is a lot of profanity and graphic violence throughout the entirety of the film, so if you haven’t seen the first movie and are going to see this for some reason, be aware of that.
If none of that bothers you, I’d say you’ve got a new movie to see this weekend.