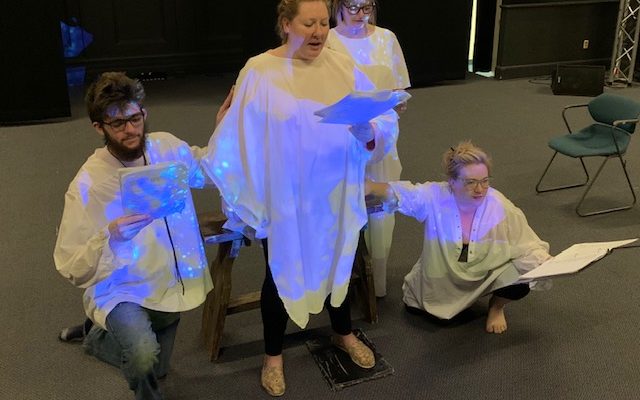 ‘Sisters Wyrd’ to take the stage for audience feedback

Schuster Theatre’s latest production will be a reimagined version of Shakespeare’s “Macbeth.”
Like its source material, “Sisters Wyrd” will also explore themes of power, politics and fate, but with several modern and provocative twists.
The original “Macbeth” follows the eponymous character’s bloody rise to power.
Macbeth is a general in the Scottish army, but he is hungry for more.
Following a series of successful battles, a trio of three witches appear to him and his comrade, Banquo.
The witches provide the pair with several prophecies, including a final doozy: Macbeth will one day be crowned king of Scotland.
When the first of the prophecies comes true, Macbeth begins salivating at the possibility that the final one will, as well.
In fact, Macbeth becomes determined that it will.
Motivated by power, greed and suspicion, Macbeth sets out on a single-minded quest to bring the prophecy to fruition, ultimately leaving a path of destruction in his wake.
“Sisters Wyrd” draws plenty of inspiration from this source material, but with a central “what if” that has guided the reworking of the script.
The Rev. Shawn Clerkin, who is directing the show, happily shared Schuster Theatre’s unique twist: “What if the witches are actually good, and are strategically engineering a shift from the corrupt patriarchy to a sound and inclusive matriarchy?”
In Schuster Theatre’s devised piece, characters’ motivations have shifted, and speeches and scenes have been moved, modified and even torched.
“Purists will find this text very disturbing – sorry, Dr. King, we axed the Porter!” Clerkin said.
The entire company, including actors, designers and technicians, have been involved in creating the production.
As the director of a devised piece, Clerkin has seen his role shift from being a visionary to being a facilitator for the work of others.
Brittany Lea, a local video artist, is also involved in the play. Her contributions to last year’s “Trojan Women” were integral to the successive of the show.
Doug Flagg has also joined the company and will be composing original music.
“It is intensely collaborative,” Clerkin said.
As this is a devised piece, the company will be relying on audience feedback during and after the performances at 8 p.m. Thursday and Friday.
On Saturday afternoon, the cast will incorporate suggestions and share a revised version at 8 p.m. that evening.
“We are hoping that this exploration will help us to ‘fine tune’ the production as we prepare to share it with 120,000 potential patrons and 25,000 fellow creative artists in Edinburgh, Scotland, next August,” Clerkin said.
This will be Gannon’s fourth invitation to participate in the Edinburgh Festival Fringe, the world’s largest arts festival.
Schuster Theatre performed “Ape/Essence,” an original and internationally lauded piece, at the 2018 festival and the group is eager to bring its best again in 2020 with “Sisters Wyrd.”
Camryn Grey, a junior pre-med and mathematics major, will be playing the role of Hecate, the head witch.
“Devising a piece can be frustrating, but it is super rewarding once we fit all the pieces together to create a coherent story,” Grey said.
Seating for all three productions this weekend is free and open to the Gannon and Erie communities.