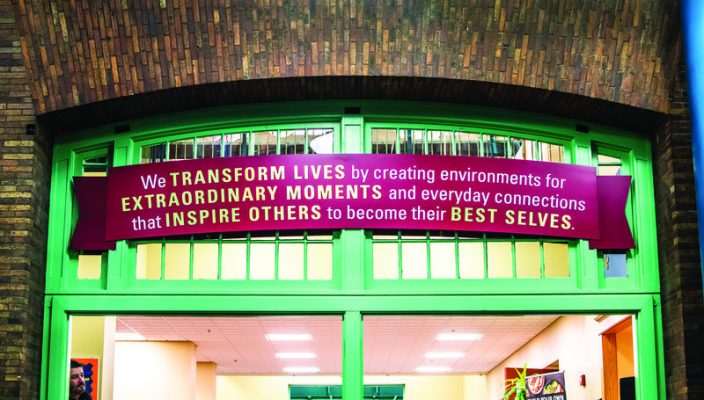 You may have noticed the GU+ symbols painted on the ground along popular Gannon University walkways, and those have to do with GU+. This week starts training sessions to introduce employees, faculty and staff to the service framework that GU+ is all about.
GU+ is a part of Gannon’s Wildly Important Goals (WIG) Fully Engaged Initiative, which started a few years ago with the intent to make Gannon a better workplace, said Doug Oathout, Gannon’s chief marketing and communications officer.
Ultimately, the goal is for this program to guide day-to-day interactions between faculty and staff members. He said GU+ is to make Gannon an even better place to work and a better place for the students.
This framework was developed in Florida. Fourteen WIG champions, chosen from various departments, met with a representative from Disney Institute over the summer. The champions were a strategic selection.
“The president’s team wanted insight in all parts of the university and also those with positive impact on the mission of Gannon,” said Aaron Kerr, Ph.D., one of these champions and an assosciate professor in the philosophy department.
While in Florida, the champions went through and a rigorous analysis of Gannon’s culture and worked to set this framework.
The framework is based on four words meant to encourage and enhance the Gannon experience: respect, well-being, engagement and seamless.
“When you emailed me, I tried to get back to you as quickly as I could, so you could do your job well, and I could do my job well,” Kerr said.“This was to make the whole thing seamless.”
These champions include Kerr, as well as Chad Indorf, assistant director of intramural and sport club recreation, Caroline DiPlacido, the project coordinator for community and government relations and Oathout. There were also champions selected from Gannon’s Ruskin campus.
The standards the champions set forth are focused on enhancing the Gannon environment and will be used to enhance the Gannon environment starting with faculty and staff.
“I’m part of a team which has already gotten feedback from all across the university to what it’s like to work at Gannon,” Kerr said. “Enhancing Gannon University training where most employees will be exposed to the meaning of these standards and enhance the reason Gannon exists: to better and transform students’ lives.”
Though beginning with faculty and staff, the changes will affect students as well. The vision for GU+ is not only to make Gannon a better workplace but to make it a better place for everyone.
Measuring the outcomes of this plan will allow Gannon to continually enhance the experience for everyone who is a part of the Gannon community, Kerr said..
Like Kerr and Oathout, students like Maria Taliani, a senior environmental science major, see the good that GU+ could bring.
“I would definitely say both students and faculty could be more courteous and proactive when it comes to communication,” she said. “In the end, everyone’s job is easier when both sides are putting the same effort into communicate.”
Nicole Borro, another senior at Gannon, said she was also open to the idea of GU+. But she wanted to know more about it and more about how the service network would be enacted.
Even without knowing all the details, she said enhancing the Gannon experience was a great idea.
“Even just seeing professors putting in an effort to email students back in a more timely manner would be really beneficial,” she said.
Although it seems new to many students, GU+ isn’t starting from nothing. Its goal is to improve upon what’s already in place, and it wants to enhance what Gannon is doing.
“Enhancement implies something good is going on,” Kerr said. “This only brings it to the surface and amplifies it for the future.”
Taliani agrees with Kerr. She said there’s a lot Gannon is doing, constantly being engaged.
“I think there’s an incredible amount of engagement going on here,” she said. “There’s never a moment where there’s not something going on benefiting the community.”