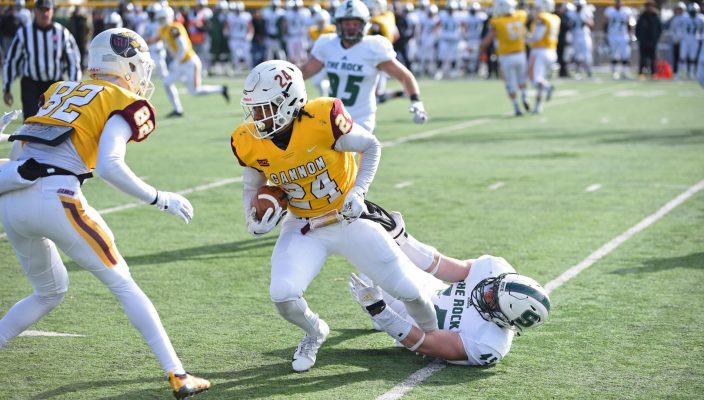 Career game for Holley; rest of the team not so jolly

Senior running back Zevin Holley had a career day carrying the football, but it wasn’t enough as Gannon University dropped its sixth straight game, 56-7, Saturday to No. 9 Slippery Rock on Senior Day at McConnell Family Stadium.
The Knights, who fell to 2-8 overall and 1-6 in the Pennsylvania State Athletic Conference West going into Saturday’s season finale at Lock Haven, actually led for a spell in the final home game of the season.
Gannon’s Keith Thompson forced a fumble on the first drive of the game, which Tre McNeill recovered to set up the Knights deep in The Rock’s territory. From there Holley was able to break away for a 28-yard rushing touchdown to put his team on top, 7-0.
Slippery Rock responded with a 72-yard drive to score its first touchdown, with DeSean Dinkins going in from 4 yards out, but the point-after attempt was fumbled to leave the Knights in front 7-6 with 11:26 remaining in the first quarter.
Gannon freshman quarterback Rashad McKee directed the Knights from their own 25 to the Slippery Rock 28 on the next possession, hitting several passes while Holley picked up 17 yards on the ground. But the drive stalled and Gannon turned the ball over to The Rock at its own 33-yard line.
The visitors needed eight plays to go the distance and take the lead for good at 14-7 on a 10-yard touchdown pass from Roland Rivers to Cinque Sweeting and a two-point conversion pass from Rivers to John Eakin with 2 minutes, 30 seconds to play in the first quarter.
From that point on, it was all The Rock, as a three-touchdown second quarter set Gannon’s deficit at 35-7 going into halftime.
The Knights had trouble getting the offense moving in the second half and the defense yielded 21 more unanswered points.
McKee, making his second career start after filling in the previous week against Mercyhurst, completed 7 of 11 for 37 yards.
Holley, meanwhile, rushed for a career-high 147 yards on 27 carries. It was the most rushing yards posted by a Gannon back this year.
Slippery Rock’s Rivers completed 20 of 26 for 293 yards and four touchdowns, and Charles Snorweah rushed for 64 yards on only eight attempts.
Slippery Rock finished with 26 first downs to Gannon’s 10, and The Rock outgained Gannon 518-181.
Khwan Mickens led Gannon’s defense with nine tackles while McNeill contributed eight and Jeremiah Brennin added seven.
Kickoff for Saturday’s final game of the season is set for 1 p.m. in Lock Haven. The Eagles sit at 1-9 overall and 0-7 in the PSAC.
No. 9 Slippery Rock, now 10-0 overall, will advance to the PSAC title game and face fellow unbeaten Kutztown, ranked No. 15, at Andre Reed Stadium in Kutztown.
This will be The Rock’s second straight championship appearance. A year ago, West Chester thumped Slippery Rock, 33-10. Coverage for Saturday’s title game will be available on PCN.

« Why do general education courses matter? Finding truth in the Gannon Family »