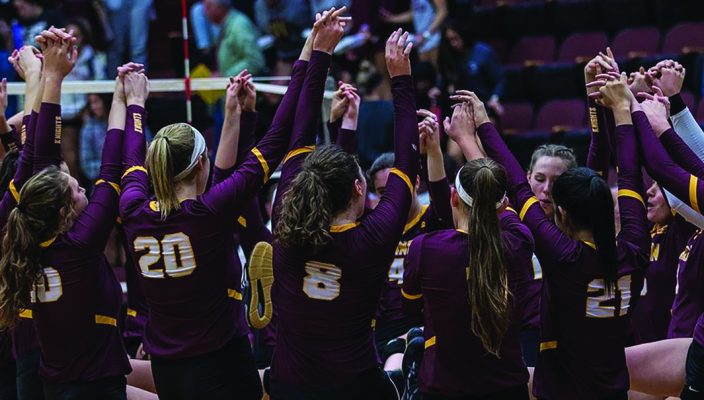 Knights volleyball team shows no signs of slowing down

The red-hot Gannon University volleyball team improved to 24-5 on the season last week after three straight sweeps against Daemen, Pitt-Johnstown and Indiana University of Pennsylvania.
The Knights improved to 15-1 in Pennsylvania State Athletic Conference Northwest action and clinched their 11th straight PSAC Tournament berth going into the final two regular-season matches of the year – Thursday at Edinboro and Saturday at Clarion.
Gannon’s first match of the week came against Daemen on Nov. 6 – the Knights’ final home match of the regular season. Gannon came away with a 25-12, 25-16, 25-21 sweep.
After trading points to open the match, Gannon rallied with an 8-0 run to make the score 13-4. The Knights then stretched their lead into double digits, 19-5, on the way to an easy win.
In the second set, the two teams went back and forth until Gannon began to pull away, building a seven-point advantage on the way to a 25-16 win.
In the final set, the two teams found themselves deadlocked at 7-7 before the Knights rattled off four straight points to make the score 11-7.
After a Daemen timeout, the Wildcats slowly came back to pull within two at 22-20.
However, Gannon was able to close the set on a 3-1 run with two kills from Ally Smith.
Ashley Kerestes led the attack with 13 kills and four blocks while Smith finished with nine kills and three aces.
Three Knights posted double-doubles to lead the way to Saturday’s 25-20, 25-15, 25-19 win over Pitt-Johnstown.
Gannon used a 5-0 run to help build a lead in the opening set and maintained a five-point edge throughout much of the frame.
n the second set, the Knights turned a 14-10 edge into a 22-12 lead after back-to-back kills from Kerestes. The Knights won the set by 10 points.
Pitt-Johnstown pushed back in the third frame and led 9-7 before Gannon stopped the Mountain Cats’ momentum with a timeout.
The Knights regrouped and ultimately took an 18-15 edge before closing out the set on top, 25-19.
Smith, Lauren Sampson and Ashley Beyers each recorded a double-double in the win. Smith registered 16 kills and 14 digs, Sampson had 13 kills and 10 digs and Beyers had 39 assists and 11 digs.
Beyers was named PSAC Northwest Athlete of the Week Tuesday.
Gannon finished off its successful week by sweeping Indiana (Pa.) 25-17, 25-15, 25-19 Sunday. It was the Knights’ ninth straight sweep, a feat the team also turned last season.
Gannon finished with a 42-31 edge in kills and a 49-30 advantage in assists.
Smith recorded her second straight double-double with 14 kills and 10 digs, and Beyers finished with 36 assists and 17 digs.
The Knights will be in action next week in the PSAC Tournament at a time and location to be announced.

« Netflix Original ‘Atypical’ improves on previous seasons Finding God on Gannon’s campus: Emotional storms can impact students as much as physical ones »