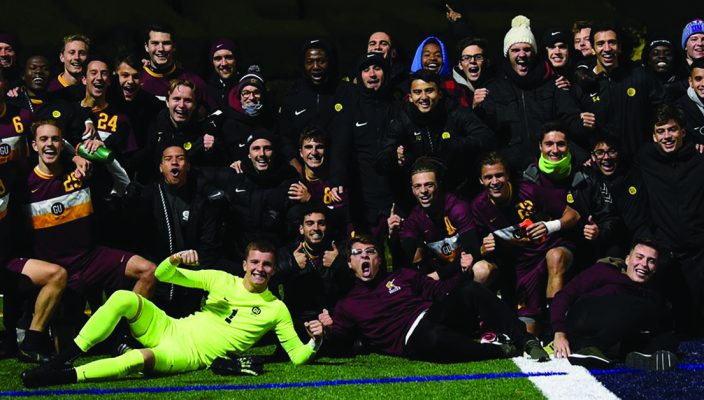 The Gannon University men’s soccer team finished the regular reason in dominant fashion Saturday at Slippery Rock, posting a 4-0 victory to stretch its winning streak to 10 games.
The victory left the fifth-ranked Knights with an overall record of 16-1, and they wound up the Pennsylvania State Athletic Conference schedule with a 9-1 mark, good for their first regular-season conference title.
Gannon will now move on to the PSAC Tournament, where it will take on West Chester in a semifinal match at 6 p.m. Friday at Millersville.
West Chester advanced by beating East Stroudsburg, 2-0, Tuesday in an opening-round tournament game. Gannon received a first-round bye.
Prior to Saturday’s win over Slippery Rock, the Knights rallied late to tie rival Mercyhurst and then beat the host Lakers in overtime, 3-2, on Nov. 6.
Sergio Castillo scored in the last minute of regulation to tie the score at 2-2 and Ben Andrews netted his first goal of the season just 37 seconds into overtime to wrap up the win.
Alex Lee Yaw scored Gannon’s first goal, which came with just 36 seconds remaining in the first half, but Mercyhurst scored the equalizer just 16 seconds later. The Lakers’ Henri Tophoven broke the tie in the game’s 53rd minute, and Mercyhurst held the lead until Castillo’s tying goal late in regulation.
In Saturday’s win over Slippery Rock, a very early goal in the first minute from Castillo set the tone for the rest of the match. Gannon took control and kept it for the duration of the first half.
Castillo scored his second goal of the contest and eighth goal of the season in the 18th minute to double the Gannon lead at 2-0.
In the 38th minute Castillo assisted the third goal of the game, which came from Lennox Crews, who scored his fourth of the season.
Slippery Rock found itself booked four times by referee Noah Hastings, including a harsh challenge inside the box in the 87th minute that gave Gannon a penalty kick.
Joe Knox converted from the spot to give Gannon the 4-0 victory.
Gannon took 18 shots on goal while Slippery Rock took only six.
The Knights’ 10-game winning streak is their longest in at least 10 years.
The Gannon women’s team capped off its season by splitting matches on the road with Clarion and Slippery Rock. The Knights edged Clarion, 1-0, on Nov. 6 but fell 4-0 to Slippery Rock Saturday.
Against Clarion, Gannon dominated for the entire first half but could not find the back of the net. The Knights let off 10 shots while Clarion let off two.
The second half saw Gannon dominate possession and not allow Clarion to break into its zone. The Eagles did not take a single shot in the second half and were pressed in their box for most of the match.
Gannon’s Kayla Bevacqua broke the deadlock in the 86th minute to put the Knights up 1-0. That would be the only goal of the contest.
The win against Clarion proved to be Gannon’s last of the season as Slippery Rock claimed a win that was much closer than the score indicated.
Gannon coach Colin Petersen had a lot of positives to take from the season as the team finished 8-7-2 overall and 7-7-2 in PSAC play.