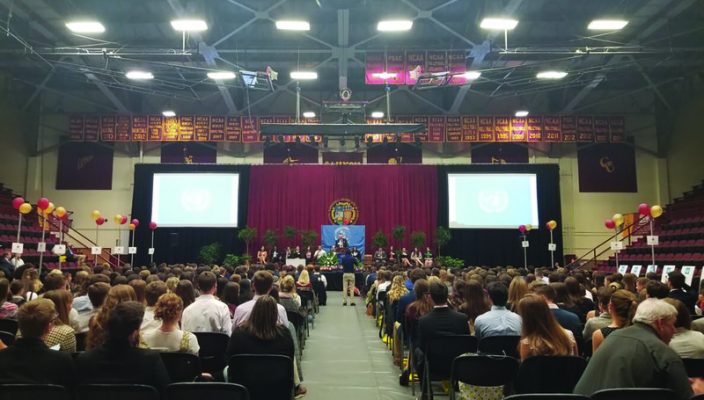 Gannon University hosted its 67th Model United Nations conference Friday and Saturday.
Gannon University Model United Nations is the second longest-running Model U.N. club in the nation after the University of California, Berkeley.
This conference serves as one of the biggest recruitment events on campus for incoming students. New this year, Vice President of Academic Affairs Walter Iwanenko, Ph.D., announced that additional scholarships valued at $4,000 ($1,000 per year) would be automatically awarded to Model United Nations participants who apply to Gannon.
Around 400 students from high schools from all over Erie County and outside of Erie attended the annual conference.
Clarence High School, Girard High School, Mercyhurst Preparatory School, Collegiate Academy, Grove City High School, Northeast High School, Fairview High School, Harbor Creek High School, Northern Porter School, Fort LeBoeuf High School, Hudson High School, Otto-Eldred High School, Fredonia High School, Iroquois High School, Titusville High School, General McLane High School, McDowell High School and Villa Maria Academy participated in different committees such as the Security Council, Historical Security Council, Disarmament and International Security, Health and Drugs and Crime among others.
The conference took place over two days, from 5 p.m. Saturday to 3 p.m. Sunday.
The first night consisted of initial debate and ended with a dance party and pizza party in Yehl Ballroom.
The second day started early in the morning with breakfast, an afternoon of debates and resolutions and awards ceremonies during the evening.
This year the conference invited Edin Selimovic as the keynote speaker.
Selimovic is a Bosnian refugee who served in the Bosnian military during the Bosnian War and genocide. A survivor of the Srebrenica massacre and a POW who immigrated to the United States in 2001, earned a college degree from the University of Criminal Justice in Bosnia and continued his studies at Mercyhurst University in 2008.
Selimovic emphasized the important role that the United Nations played during the Bosnian genocide and how this organization was able to help him and many others.
Some students found Selimovic’s speech moving.
“I think that his speech was really inspiring, and it aligned perfectly with the day’s event to motivate students to do their best at the debates tonight,” said Kyla McNulty, a sophomore public service and global affairs major who was the chair for the Drugs and Crime committee.
For many members of the Model United Nations club, it was their first time participating in the conference.
After many weeks of preparing for the conference, the members were anxious to finally participate.
Jenna Halasz, a sophomore biology and chemistry major, said, “I’m excited to participate in my first-ever Model UN conference; instead of competing, I serve as the secretary and vice chair of debate. Everyone in my team works cohesively and is very kind.”
Halasz said that she was content with the club. “I’ve never felt more welcomed by a club at Gannon,” she said.
Randall Sutter, a sophomore public service and global affairs major and this year’s Model UN club secretary general, thanked everyone who contributed to the result of this conference and said he is looking forward to making next year’s conference even better.
“The event was better planned and executed than ever before,” he said.
“I am so thankful for the hard work and dedication of my executive board, advisers and club. The success of this conference has convinced me that our conference has the capacity to grow and expand in the upcoming years.”
Among the faculty members who contributed to the outcome of this year’s conference were Anjali Sahay, Ph.D., an associate professor of international relations and political science; Timothy Caswell, Ph.D., an associate professor in the psychology program; Alexandra Holbrook, Ph.D., an assistant professor in the history program, and Jeffrey Bloodworth, Ph.D., an associate professor of history.