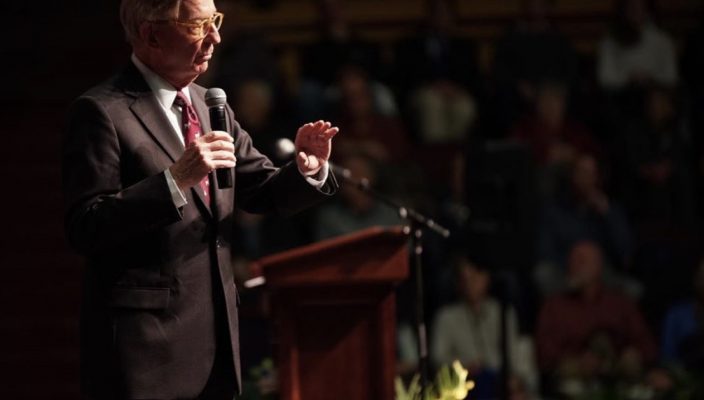 The Hammermill Center swarmed with eager listeners Thursday night as George Will took the stage to discuss debt, healthcare, family disintegration and the power of the government as a part of the Jefferson Educational Society’s Global Summit XI.
Ferki Ferati, president of the Jefferson group, began the evening by thanking the society’s sponsors and Gannon University for hosting. He said that the collaboration between Jefferson and Gannon “created a model for intergenerational learning.”
Gannon President Keith Taylor, Ph.D., introduced Will, who has several connections to Western Pennsylvania — his father was born in Swissvale and his mother was born in Greensville. His parents met at Thiel College, and his mother taught in the Corry School District.
“I’m here to depress you completely,” Will said, speaking first on America’s debt, or “the most predictable crisis in our history.”
Will spoke next on health care. He referenced the fact that there are now only 2.5 workers to every retiree, significantly fewer than in recent years, and said that raising the retirement age is a good solution. Will said that the real issue is modern medicine causing people to live longer, which means they use health care longer. Not only do we spend too much on health care, Will said, the bottom 50% of earners pay less than 3% of the income tax. He said that stratified income is a main driver of income inequality. Will maintained, however, that income inequality cannot be fixed by fixing the education system, as is the popular belief.
Will said that family disintegration is the real issue at hand, not the education system. Children coming from single-parent households or unstable homes do not do nearly as well in school, Will said, and this becomes a domino effect that leads to economic strife.
“Until we fix [family disintegration], we can’t fix the education system,” Will said. “Until we fix this, we can’t fix inequality.”
Will acknowledged the taboo on this subject, but he said that it must be discussed in order to repair America’s economic state.
Turning to employment, Will said most job losses are not from foreign competition but from rapidly growing companies like Uber, Netflix and Amazon. He stressed that Americans do not want a society in which the government can control which industries are favored.
Will said that “bad things happen when the government knows everything,” and that the government must not try to solve all of the country’s problems itself because that will not work. Will elaborated on this topic more in an earlier session with the media.
Will said that the ideal state is when there is a “wholesome rivalry” between Congress and the president and that Congress is Article I of the Constitution “for a reason.” “At the end of the day, this is representative government,” Will said. “If the Americans want different government, all they have to do is choose different governors.” “My message is simply ‘freedom works,’” Will said. “The American economy is the greatest anti-poverty system ever invented. Let’s not mess it up.”
Ending his speech on what he called a surprisingly positive note, Will said that America is a “raging success story” and that its big problems can be fixed by choosing to fix them. “America is a continuing success story if we don’t forget how we got here,” Will said.
After the speech, Pat Cuneo of the Jefferson society led a question-and-answer session, beginning with Will’s thoughts on President Trump’s impeachment proceedings. Will said that there are two reasons to impeach a president: first, as punishment for past actions, and second, to prevent future actions.  Will said he thought Trump could be impeached on both grounds but reminded everyone of both parties to be civil about it, saying, “We all have to live together.” “Get it over with and let’s have an election,” Will said. Among other questions, an audience member asked Will if he would be willing to vote for a Democratic presidential candidate. “I’m perfectly prepared to vote for a Democrat,” Will said, “if they stop making it so difficult.”