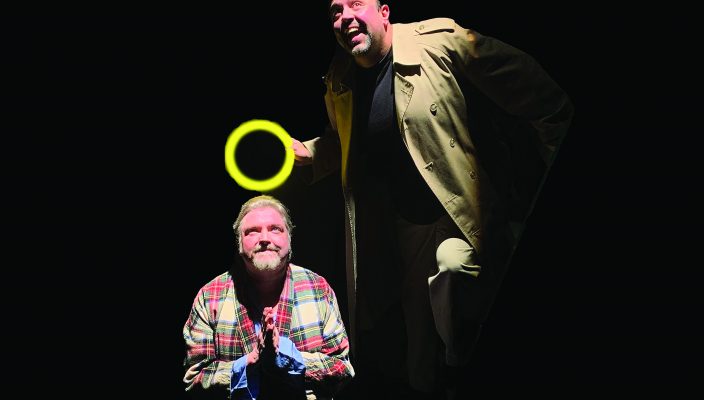 If you’re familiar with the Biblical story of Job, “humorous” is likely not the first adjective that comes to mind. “Tragic,” “depressing” or “nihilistic” probably fit the bill a little better.
In the original story, Job is an obedient servant to God and devout to a fault. He’s also bestowed with plenty of earthly pleasures, including wealth, health and a large family.
Enter: Satan.
He scoffs at Job’s devotion and challenges God to a little duel to see how deep the man’s faith really runs.
In one of the Bible’s stranger twists, God says, “Bring it on.”
Caught in the crossfire of the wager, Job loses his 10 children, is afflicted with horrible skin sores and generally gets sent through the ringer.
Ultimately, Job keeps his faith and God steps out of the ring triumphant.
There’s not a lot to laugh at in this meditation on suffering, but playwright Neil Simon milked the material for all it’s worth in his 1974 comedy “God’s Favorite.”
The play follows the Biblical precedent pretty closely, except swapping the setting to 1970s Long Island and giving everyone a heavy New Yawk accent.
All An Act Theatre’s production of the play, directed by David W. Mitchell and KC McCloskey, delivers plenty of laughs as well as posing some deeper philosophical questions.
Joe Benjamin, played by Raymond Steinbacher, is the wealthy and pious owner of a booming cardboard box company.
One night a mysterious visitor, played to full comedic effect by Chris Bucci, breaks into Job’s mansion and claims to be a messenger of God. He even has a ‘G’ on his oversized gray sweatshirt to prove it.
The visitor, who eventually introduces himself as Sidney Lipton, has a big message from the big Boss: Joe is God’s favorite, but his faith is going to be tested.
If things get too rough, Sidney emphatically informs Joe that the emergency exit hatch to stop the test will be to renounce God.
Joe is understandably a bit skeptical – until his box factory burns down later that night.
From there, the tests of faith fly fast and furious.
Steinbacher is stubborn and stoic as his character Joe, delivering laughs by playing up the martyred husband and father bit.
Wife Rose Benjamin, played by Lisa Simonian, is silly as a pampered and oblivious housewife in her slippers, hair curlers, earplugs and full face of makeup.
The couple’s three children, played by Andrew Heidt, Tori Snyder and Ben Robson, add to the family dynamics.
Robson is a particular standout as a flippant, wise-cracking alcoholic and general wayward son.
Shantel Kay and Dave DiCola round out the cast as the family’s servants.
It’s truly Bucci who steals the show by hamming it up as the larger-than-life, flamboyant and movie-obsessed messenger.
“Sidney is definitely an interesting character,” Bucci said with a laugh.
“I think there’s some clues in the script that he might not be who he says he is, and that gray area is a lot of fun to work with.”
Bucci has been performing with All An Act Theater since its inception in 2004 and has been cast in dozens of shows.
The scenes depicting Joe’s physical suffering were sometimes difficult to watch and straddled the line between slapstick comedy and pure discomfort.
Given that Neil Simon chose a Biblical tragedy for his inspiration, his affinity for dark humor throughout the script is not surprising.
Set design and scenery painting, executed respectively by Mitchell and Peggy Brace, were impeccable.
The quick transformation of the Benjamins’ luxurious mansion to an utterly burned-out wasteland was impressive and convincing.
Performances of this devilishly good comedy will be at 7:30 p.m. Friday and Saturday and at 3 p.m. Sunday through Dec. 1, with no show on Black Friday.
Saturday, Nov. 30, will be a benefit performance, with all proceeds going toward winter gear and Christmas presents for Erie’s children in need.
Admission is $12 for adults and $10 for students and seniors.